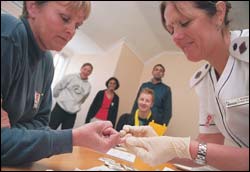 If Linda Haynes has one complaint about her recent HIV test, it's that the needle bites.

But Haynes and other members of the UCT Employees Union (UCTEU) exco figured the prick of a needle was worth the sting when they, en masse, attended a voluntary HIV counselling and testing session of the university's Direct AIDS Intervention (DAI) programme at Cambria House in July. By undergoing the tests in front of the Monday Paper cameras, the group hoped to trumpet an initiative that, in spite of its very noble intentions, has not quite enjoyed the patronage it merits.

Launched in July 2003, DAI is an HIV/AIDS counselling and testing service provided on UCT's behalf by Alexander Forbes' Health Management Solutions division alongside Right to Care, an independent NGO that promotes managed HIV/AIDS care. Through DAI, UCT permanent staff and those on T2 (two- to five-year) and T3 (five-year) contracts have free access to HIV education, as well as confidential diagnosis, treatment (anti-retroviral therapy) and support. The programme hosts information sessions and on-site testing - results are available within minutes - at Cambria House every last Friday of the month. Sessions are also regularly arranged at faculties and departments.

But staff have not been turning up in the numbers the university had expected they would. The human resources department had hoped that about 20% of UCT staff - around 600 people - would either have attended the session and/or undergone testing by June 2004. But by mid-July this year, only 10% had availed themselves of the offer.

Which is why the UCTEU stepped into the fray. "The union executive decided that as a staff representative body - because staff are the beneficiaries of the programme - we should be seen to support it," said union president Vicki Scholtz. The union, added Scholtz, was also taking its cue from the leadership of other tertiary institutions, including Professor Brian O'Connell, rector and vice-chancellor of the University of the Western Cape, a vocal champion of HIV/AIDS awareness programmes who underwent public testing at his Bellville campus. "Someone should be seen taking the lead," said Scholtz.

With the university pumping between R1-million and R1.5-million into DAI each year, it's also essential that staff make ample use of the facility. DVC Professor Martin Hall is adamant, however, that UCT will not jettison the initiative. "The programme will not be abandoned," he said. "We are committed to provide assistance whatever the take-up rate. We will, of course, do all we can to encourage staff to act responsibly, and get tested."

And, publicity purposes aside, getting tested is why members of the UCTEU committee made their way to Cambria House. Even with the support of colleagues, however, it was still a nervy experience. No matter how confident someone is that they're negative, noted Scholtz, "you just never know".

"I'm afraid of talking about my fears," joked Haynes, who wasn't just talking about the business end of the needle either. But, whatever the outcome - and she had no reason to suspect she would test positive, she said - she just needed the peace of mind.