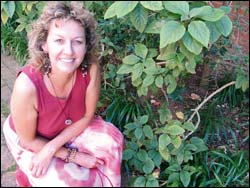 Trish Zweig is something of a revelation. The scholar is euphemistically described as a mature student. A mother of two daughters, one of whom is also studying at UCT, the forty-something master's student in the Environmental and Geographical Sciences department waitressed for 20 years before deciding what she really wanted was a university degree.

Though her scholastic enterprise has extended further than she first planned, she draws the line firmly at the idea of a PhD.

"I want to get out and work in the community," she protests.

Her early leaning towards drama at school gave way to a very different inclination once she entered higher education. The human aspects of the study of geography brought together her interests in people and place, and her master's degree has taken this into the realm of land tenure and social transformation in the Western Cape.

It's topical research and prises open an area fraught with difficulties and complexities.

This insecurity of tenure produces bureaucratic, legal and political challenges that frame the often confrontational context in which state officials, NGOs and community-based organisations and activists and researchers engage in development."

"The result is a well-intentioned but often piecemeal process of unpicking and redressing these historical inequities to meet constitutional socio-economic rights to secure tenure."

Using the New Crossroads community as a case study, Zweig examines the legacy of black local authorities and how poor urban communities engage with the local authority to address issues of tenure security.

The workshop provided her with a valuable opportunity to open these issues to important role players. It was something of a coup that she managed to gather the gamut of these representatives, eye to eye, around the same table and in the same forum to share and reflect on existing policy and practice.

"We even had representatives of the Anti-Eviction Campaign sitting around the table with members of the council."

The two-day workshop included panel discussions on the legal, policy and political aspects of tenure.

"We want to tackle these issues in a collective way," Zweig said, "bringing together all our resources to address the issues raised."

Gathering all the stakeholders took some doing and Zweig made sure the seminar was extended to include a tour of New Crossroads community memorials, followed by dinner in the local Uvimba CafÃ©, taking the diverse group into the heart of the matter. 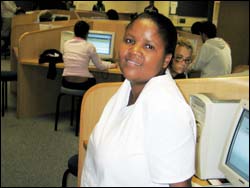 Ear to the ground: Potter Fellow and master's student Babalwa Cwane is examining the efficacy of telecentres.

The drive to introduce First World communications to fast-track rural development has seen the rapid rise of telecentres in some of the country's remoter towns and villages.

Social-sciences graduate and master's student in information and library science, Babalwa Cwane, is examining the role of information and communication technologies, particularly telecentres, in community empowerment.

The seminar that came wrapped up with the Potter Fellowship presented the postgraduate student with some new challenges.

"I'd never organised an academic seminar before," Cwane said.

With a line up of renowned speakers in the field of business communication technologies (including Mike Jensen, guest speaker Dr Ed Maepa of the National Research Foundation and Telkom's Madoda Cuphe), she provided a forum for some lively debate.

More recently, Cwane's fieldwork took her to Port St Johns, where she researched the efficacy and role of telecentres in communities.

She has a special insight into the problems experienced by rural users of telecommunications centres when faced with First World technology. Her interest in computers grew out of her own frustrations with computer literacy as an undergraduate.

"With my background I had to learn computer skills from scratch."

Telecentres have come to the fore at exactly the time the government has been encouraging the country's participation in the global information society.

Proponents of telecentres believe these clusters of technology can deliver a range of developmental services, from health, education and agriculture, to natural resource management, micro-enterprise support, pension and welfare payments.

The government charged the Universal Services Agency, a statutory body established in terms of the Telecommunications Act 103 of 1996, with the responsibility of spear-heading universal service by rolling out information communication technology services in rural areas.

However, the cost factor has been a major stumbling block to significant access to this technology and thus initiated the provision of information services in the rural areas through public information points, known as telecentres or multi-purpose community centres, exploiting the convergence in computer and telephone technologies.

While she agrees that information and communication technology has the potential to foster development in rural communities, it isn't enough to simply roll the hardware or infrastructure off the back of a truck.

"It's no good parachuting facilities into these communities without providing computer training or even consulting them. The people just ask: 'What can we do with this?' Technology developers should be asking: 'Which technology might help here?'."

Her evaluation of telecentres will answer some pertinent questions. First up is: do these hubs of technology work for these communities? "Though they may offer an array of communications media: fax machines, photocopiers and computers, in many cases people use only the phones," Cwane says. This is technology that is understood.

But the role of telecentres goes beyond global connections; they also offer natural gathering places for community meetings and for service provision, for example the Department of Home Affairs, which gathers ID applications, death and birth registrations from these centres. The centres are also used to disseminate HIV/AIDS information and even act as distribution points for condoms.

"One of the failures of information communication technology projects, especially telecentres, is the top-down, non-consultative, technology-driven approach where emphasis is on the technology itself and not the intended users," Cwane contends.

"Whoever initiates the establishment of these centres must consult with these communities and complete proper needs assessments."