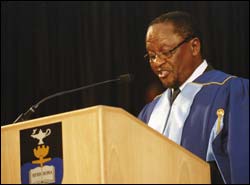 As South Africans faced the full repercussions of the HIV/AIDS pandemic, for the first time since 1994 they witnessed the strength and fragility of the country's new democracy. This is an extract from the vice-chancellor Professor Njabulo Ndebele's citation, delivered shortly before President Thabo Mbeki received the UCT Chancellor's Award for Outstanding Leadership in Africa.

Having left South Africa in the early sixties, you were to return to your country some thirty years later after playing a major role in the first, path-breaking interactions between the ANC and key Afrikaner opinion-makers who had the courage to seek new ways of achieving a just society in South Africa. Many people today wonder whatever happened to the pipe that defined you those days. It projected a brazen, yet steady confidence that promised to come up with a solution to any quandary. It went with a telling sense of humour that can be deployed with serious intent and timeliness as when, it is reported, that at that historic Dakar meeting, you unexpectedly introduced yourself to the Afrikaner delegation as an Afrikaner.

Nothing better could have wreaked havoc on the politics of labels and the perceptions that people develop of themselves and others as a result of those labels which can sometimes solidify into terrible defining truths. You showed how fragile such truths can be. That way you opened up fresh possibilities for alternative ways of perceiving.

We remember your Deputy-Presidency under the inspirational and visionary leadership of President Mandela, and how you oversaw the complex process of policy and law-making which defined President Mandela's historic tenure. Your election as President in 1999 enabled you to focus on delivery, turning policies into instruments for bringing about real change. In this you demonstrated the lasting value of orderly transitions.

You went on to preside over the Republic of South Africa when the HIV/AIDS pandemic became the foremost among urgent issues of public health facing our country. Amid the pains, tragedies and uncertainties linked to complex matters of life and death; in the tension between emergency and foresight; between the immediacy of caring and reflective responsibility; between perception and reality; between the desire for public confidence and the lonely consequences of honest self-knowledge, your leadership was tested to the utmost limits. We learned much about ourselves as South Africans during that time when we faced the full consequences of the pandemic, and we faced, at the same time, for the first time since 1994, and often with unnerving starkness, both the strength and fragility of democracy.

We saw in those days courageous South Africans who gave meaning to democracy. We saw also, an equally courageous President with a strong sense of the meaning and purpose of his presidency, facing the sometimes lonely consequences of that purpose. Where are we now? We are stronger for the experience, having been exposed to both committed activist advocacy and your thoughtful steadfastness. It could be said you lead with pain and resolve, helped on by your enormous sense of responsibility. You left your mark on the possibilities of power, governance and leadership at the coal face of life and death. Few have gone down that path.

You have shown similarly thoughtful resolve in your role as an international statesman. In this you made strategic choices. South Africa should not be an island of progress in a sea of need in sub-Saharan Africa. South Africa, you seemed to say, has no option but to be intricately connected with the world. In making that choice, you have considerably enhanced the status of our country in global affairs. In this you have championed the cause of Africa before the world's most industrialised countries, insisting always on mutual respect and fair trade between the nations of the world.

In that role you have championed the cause of the poor and disempowered at the United Nations Security Council, at the World Trade Organisation, at the African Union, and other international forums, keeping poverty and freedom as development on the international agenda. It was crucial for you to do this because you understood how continued poverty and instability in Africa fed foreign perceptions of Africa as a continent without hope.

Equally so, you have made unrelenting demands on Africa. Africa must stand on its feet and reclaim its self-respect. This task cannot be undertaken by other people on behalf of Africa. The African Renaissance is not a romantic quest for the past; rather, it is about making radical, hard choices in the interest of the peoples of Africa.

In this respect, your message has been consistent: Africa must end its conflicts. We cannot achieve a better life for the citizens of Africa in the midst of unending conflict and unstable states. Under your leadership, our country is tirelessly involved in peace making and peace keeping in the Great Lakes region of Africa.

It is said that a country cannot desire to do elsewhere what it does not do to itself. Indeed, we cannot convince others to pursue ideals we ourselves do not espouse and practice. In this, South Africa, under stable and hardworking leadership, continues to manage its economy resolutely; continues to strengthen its institutions of democracy through increasingly habitual recourse to them in resolving the full spectrum of problems; continues to achieve social redress through constitutional means, increasing the field of opportunity and directing resources to where they will make a major difference to the quality of life of communities; continues to prefer conflict prevention and conflict resolution through transformative dialogue as a means for achieving stable, yet purposeful social transformation. Our country is succeeding in persuading all its citizens that it is truly a home for all. At various levels of society, South Africa is an increasingly self-confident country, with a will to succeed, because we spent time persuading one another of the value of the common future we have chosen. In this, we are thankful for the quality of leadership we have enjoyed and are continuing to enjoy. This beautiful country deserves no less.