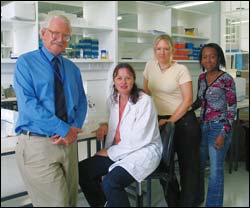 An injection of more than R10-million from the Hasso Plattner Foundation has boosted the capital campaign for UCT's Institute of Infectious Disease and Molecular Medicine (IIDMM), providing much-needed funding for constituent research laboratories dealing with HIV and related pathogens. The money represents 22.5% of a R46-million (â‚¬ 6-million) donation to three partners, and is the IIDMM's largest donation since the fund-raising campaign was launched in 2001.

Dr Hasso Plattner is one of five founders of the German software giant SAP, the leading provider of business software solutions in the world.

The Plattner donation supports two main partners in HIV/AIDS research and programme implementation: UCT's IIDMM, where the money is being used for the construction of the HIV laboratories as part of the IIDMM's capital project, and the Doris Duke Medical Research Institute of the University of KwaZulu-Natal (UKZN), where, among other things, the funds are being used to create a chair in HIV/AIDS research at the University's Nelson R Mandela School of Medicine.

The largest part of the donation (55.5% of the funds) will support the Isisombululo Project (isisombululo means "solution"), a community-based HIV/AIDS and TB-related programme in the Eden district (George, Knysna, Plettenberg Bay and Mossel Bay) of the South Cape.

This project is supported by the Provincial Administration of the Western Cape's programme on HIV/AIDS and is enriched by the contributions of scientists, clinicians and other health professionals from UCT and the UKZN.

Nontombi Jubeju, project manager of the Isisombululo Project said: "The objective will be to grow capacity within the health system in the South Cape region, to support a number of HIV/AIDS and TB-related initiatives."

(The official opening of the IIDMM takes place on 23 March.)