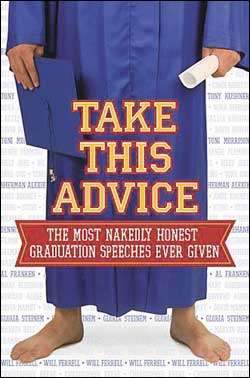 Professor Njabulo S Ndebele's graduation address at Wesleyan University, in the United States, in 2004 has been republished in a book titled Take This Advice, a collection of "the most nakedly honest graduation speeches ever given". This is an extract:

Perhaps to get a sense of just how far we have come, let us recall what it was like living in South Africa just before we gave up war and violence as a solution to our problems. We remember how arrogant and self-righteous white society and apartheid government were in those days, and how those attributes of behaviour made them blind to their cruelty and the extent of it. They projected invincibility, as if things would be the way they wanted them to be to the end of time. The South African sun, they said, would never set. Being the most powerful military machine in Africa, they had terrorised the entire subcontinent to submission. Their military capability had far outstripped their capacity to make it accountable to a higher moral order. The value of their humanity and their identity as a people became inseparable from, and even reducible to, their weapons of war. They had become a manipulative state, obsessed with the mechanisms of its own survival.

They had this sense that they could stand up to the whole world, defy global opinion, and do whatever they liked in the pursuit and promotion of their self-interest. In this they subjected their own citizens to the kind of constant brutality they meted out to others. In dealing with those they regarded as of lesser human quality than themselves, they were accountable to no higher morality. I remember that far from earning my respect, I deeply feared them. But it was a fear that went with much loathing.

It all seems like a bad dream now. Within a short space of time, the false sense of invincibility gave way to a deeply liberating sense of vulnerability and even humility. That was one of the defining moments of our transformation: this embrancing of uncertainty and vulnerability, which at the same time went with the certitude that the past was unsustainable.

I have reflected much on this. What seems to happen in this situation is that at the point at which you recognise mutual vulnerability between yourself and an adversary that won't go away, you signal a preparedness to recognise that there may be new grounds for a common humanity whose promise lies in the real possibility that you may have to give up something of what has defined your reality, handed down from a past that cannot entirely meet your best interests now and in the future. It is the humility that arises when you give up certitudes around what was previously the uncontested terrain of your value system and unsustainable positions derived from it.

It is a delicate psychology that is at play here. Its full potential is possible only through a newly discovered foundation of trust. It is about how to reconstitute identity, meaning, and credibility during that fragile moment when you and your adversary are both in danger of losing them all. It is about recognising that both of you are caught in a situation of profound need for each other. But it is never easy to reach such a position, and if it can be so difficult for individuals, consider how difficult it must be for entire nations. Few are the moments in history when nations were in a position to accept that they could be wrong, that a value system that stood them so well through centuries may no longer be sustainable. In this, nations would rather go to war and be humiliated by unintended outcomes that showed them just how much they ignored an inner voice of caution, or the pride that forced them to ignore it.

These reflections arise from my challenge to our graduation class to stretch their imagination back into history to try to find what could possibly connect a 10-year democracy with one that is more than 200 years old. Well, what is this connection?

We still recall with excitement in South Africa the pains, traumas, and finally the pleasures of giving up a past. I believe that for you in the United States, the connection is your capacity to recall how exciting it was to do so more than 200 years ago. Where do you sense yourself to be at this juncture in this world that all of us live in? Is there reason to contemplate another birth? Is there need for some great leap to be taken? One of the greatest fears of political leadership is the fear of losing it. The question is, has the fear become so inordinate that it has become a real threat to the future?

So much has happened to you since 9/11, when the world was truly in solidarity with you. I wrote to my friends all over the United States, telling them how much I suffered with them. Since then, I experience the world with increasing fear. I see the world becoming more and more divided. I sense that the situation we are in from a global perspective is not fundamentally different from where my country was 10 years ago. I sense the world needs a leading nation, or group of nations, that can reassure, inspire hope, and offer fresh perspectives and new directions. I ask myself what nation or nations could possibly do that. I do not have an unambiguous answer. One moment I know it, the next moment I don't. Of one thing I am certain, though: the evolution of global awareness has led us to yearn for a world that needs to value highly, multiple visions of itself. We need leadership to get us there. Where will it come from?

One thing is certain also: War and conquests in the 21st century suddenly look distressingly primitive as instruments for conducting the affairs of the world, no matter how advanced the weapons of war. We need a new value system for resolving world conflicts. In that value system the mechanisms for the resolution of conflicts and disputes would be founded on the principle that it is possible and even desirable to achieve mutually affirming solutions, to have mutually respectful victors and no losers. The value system based on a single, predetermined solution, often one that is imposed by force of arms, will not result in mutually affirming outcomes, but can generate powerful human emotions that lead to perpetual global dissonance, anxiety, fear and despair.

Now, I do have faith in the power of humanity to reinvent itself. In this, every graduation offers that possibility. That is why I am so happy for you, Class of 2004, who are moving out into the world, confident that you will contribute to societal renewal through your infectious enthusiasm and zest for life.