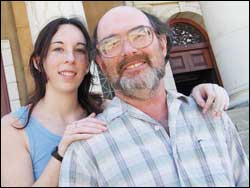 Keeping it in the family, Associate Professor Charles Merry (geomatics) will cap his daughter, Margaret, on December 14 when she steps up to the platform to receive her BSc (honours) in geology.

Margaret, who matriculated from Westerford High, began her studies here in 2002 and got her BSc in 2004, majoring in geology and chemistry - with a distinction for the latter.

UCT is very much part of the family. Her brother, Bruce (he of computer science and mathematics fame) is a postgraduate student here.

Margaret's mother, Corinne, obtained a BSc (honours) in physics at UCT in 1971 and her PhD in physics in 1980, with an MSc from the US in-between.

Though dad Charles wrapped up his PhD in Canada, he completed his undergraduate studies at UCT: a BSc (Survey) degree in 1969.

Quick out of the starting blocks, Margaret has already started a job as a geochemist with an environmental-resource company based in Cape Town.