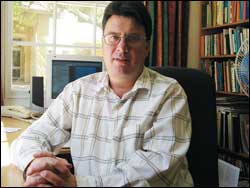 Fifty percent of people who develop psychiatric disorders during their life will do so by the age of 14 years, and 75% will do by the age of 24 years, providing the breeding ground for a range of risk behaviour and providing a vivid picture of a group in crisis, says Professor Alan Flisher, director of the Adolescent Health Research Unit and head of the Division of Child and Adolescent Psychiatry.

The predominant ages of the onset of psychiatric disorders correspond to the ages at which risk behaviours commence and have high prevalence rates.

This presents a compelling argument for comprehensive mental health programmes among the country's youth, he said at last week's inaugural lecture, Risk Behaviour in the Second Decade.

Flisher holds what must be a record seven degrees from UCT. He earned his BSc in 1977 and amassed a further six degrees: an honours in social science, an MSc in clinical psychology, an MBChB, a master of medicine in psychiatry, a PhD and a master of philosophy in child and adolescent psychiatry.

His PhD thesis was on the epidemiology of risk behaviour of high school students in the Cape peninsula, his interest piqued when he was involved in a project that investigated the counselling needs among UCT students in his honours year.

There are many long-winded definitions of risk behaviour, but Flisher has a neat summary: it's behaviour that places a person at risk for adverse consequences in the psychological, social or physical domains. It could be interpersonal violence leading to injury or psychological trauma, or it could be unsafe sexual behaviour causing pregnancy or sexually transmitted infections.

According to World Health Organisation statistics, 70% of premature deaths of adults are due to risk behaviour initiated in youth.

Where does one begin to address the problem? In schools. Since 1990, Flisher and his research groups have been involved in nine school-based epidemiological studies, involving thousands of adolescents (grades eight to 12).

The studies all had common features and common core questions, providing researchers with a fascinating window on risk behaviour prevalence across different places and times.

Why is it this? It's not a question Flisher can answer straight off. The question begs further research, he says.

With the girls, there are no consistent trends regarding age of sexual debut. They are more likely to use contraception but there were no changes in the rates of condom use.

Gathering reams of data can be time consuming, costly and prone to error. Flisher and his team have introduced an innovative - and definitely trendier - means of data collection, using personal digital assistants (PDAs).

They are the first to have collected data from schools using PDAs. Data quality is better and it can be downloaded immediately and directly onto a PC.

But for all the information they have, researchers are still pondering the causes of risk behaviour and the interactions between the distal context (culture and structural factors), the proximal context (interpersonal factors, the physical and organisational environment), and the personal level (personal attributes and behaviour) that produce risk proclivities.

"In this instance, interventions that protect the adolescent from risk behaviour are most likely to be effective if they are aimed at the family and school domain," Flisher said.

Researchers also know that there is a developmental sequence of drug use; young people proceed from alcohol or tobacco to cannabis, to hard drugs.

"Prevention efforts for a particular substance should focus on preventing those in the previous stage from progressing down the sequence."

The aim is to catch adolescents before they become sexually active, which often means very early, between the ages of 12 and 14 at least.

The classroom-based project is tailored to local culture and circumstances. It is hoped it will inform the outcomes-based life skills education prescribed by the Department of Education.

"We aim to postpone the onset of sexual activity in those that are not sexually active, and increase safe sex practices among those who already are," Flisher explains.

The project grew out of an earlier European Commission-funded research network, the Adolescent Reproductive Health Network (or ARHNe), which aimed to promote health among adolescents in South Africa, Tanzania and other countries in the region. In the current project, interventions are occurring at three sites: Dar es Salaam, Tanzania; Polokwane, Limpopo Province; and Cape Town.

The seven partner universities, including five institutions in Norway, Sweden and the Netherlands, each have a specific role. The African partners are accountable for developing, implementing and evaluating the intervention locally. The European partners provide technical and scientific support.

It isn't enough for teachers to preach abstinence. The pupils are taken through a discussion of how to escape risky or pressure situations.

But it's not only the adolescents who are being educated. Using this programme, the teachers are able to meet their young charges at their level to discuss the influences and pressures that affect their daily lives.