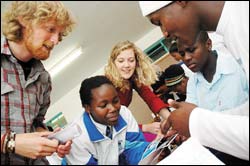 What with the pressures of academia and churning out a newspaper every so often - and they're hoping for more often - you'd think that the newshounds at student newspaper Varsity would have enough on their plates.

But a year or so ago, commerce student Gill Einhorn, who holds the community development portfolio at the publication, figured that they could do more. So Einhorn, winner of a Student Leadership Award this year (see front page), looked around for schools in nearby townships from where she could kick-start a programme to get learners there interested in the art of journalism.

She started with five learners at Zisukhanyo Secondary in the Samora Machel Informal Settlement on the outskirts of Nyanga, a group that has now grown to 145 learners taught by 14 local and international UCT volunteers.

And the programme - now known as the Media School - has been expanded to Sinethemba Secondary in Browns Farm, Phillipi, where learners plan to launch a school newspaper. The projects are run in partnership with the South African Education and Environment Project (SAEP).

The Media School has a broad mandate.

"The focus is on journalism and the improvement of writing skills," says Einhorn. "But it's also about teaching the students life skills, like how to deal with interviews and write CVs. We want our students to be able to handle the challenge of finding or making a job after school."

There's also been a section on photojournalism, where learners were handed disposable cameras and instructed to shoot story-worthy pictures in their areas. But more than that, the project is about giving the learners an A-to-Z glimpse into the world of journalism, from where to use a comma, to analysing a page layout, to freelancing for local papers.

Learners are also encouraged to write about issues that touch their communities, and get their work published, be it in the school paper or elsewhere.

There are now about 85 regulars at the two schools, but when numbers dipped a while back, the Media School ran a well-attended camp (see a picture on the SAEP website at www.saep.org) to keep learners motivated.

"When I first came here," says Sivuyile Dyonase, a grade 10 learner at Zisukhanyo, "it was very hard, because I felt lost. But as time went by, I began to really enjoy it."

SAEP's Richard Tyembile, who was a member of the Media School's inaugural class, sees even greater value in the project.

"Unlike me, when these learners leave school, they will know what they want to do."

Now that's worth a headline or two.