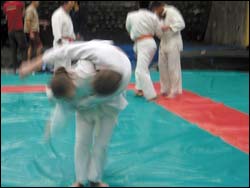 Cat on the mat: UCT ju-jitsu members get to grips.

Muya Koloko, the strapping 20-year old chair of the UCT Ju-Jitsu Club, remembers the day he limped back to Kopano, holding his ribs.

The damage had been inflicted by a 60kg ju-jitsuka - and a woman at that. He was not only nursing bruised ribs, but a bruised ego, he jokes.

But he could have been an attacker. And she had dealt with him as such, with a well-executed shoulder throw, and then pinning him to the mat. Really pinning him.

"It's nastier than judo," Koloko explains wryly, recalling that his sensei had once demonstrated how a simple but effective ear twist could render an opponent, well, speechless.

Ju-jitsu was developed by the Japanese samurai warriors. If they lost their sword or horse in combat, they would simply battle on with their hands and bodies.

Throws and holds were more common, due to armour limiting the effect of strikes, hence moves like the "guillotine choke" and "Devil's hand".

They meant business, did these lads.

Thankfully, things aren't quite as extreme in Sports Hall 3, where the UCT cohort goes through their paces, gripping and grunting and throwing and holding.

Next year the club turns 30 and it has plenty of momentum to build on. This year they enjoyed a record-breaking signup spree (with 105 members, the club has broken its previous sign up record of 101).

The club, which is taught by senseis Nigel Sessions and Mark Smith, also helped organise a recent grappling tournament and a seminar held by Roger Gracie (in conjunction with Gracie-Barra Cape Town).

A Zambian, Koloko was schooled at St Stithians College in Johannesburg. Coming to UCT was the "socially acceptable" thing to do. He's here to do a law degree, preferably sports law, if he can stomach the long stretch of postgraduate learning.

A former rugby player (he can still be persuaded to play for his res), Koloko began ju-jitsu in 2003, with "minimal coordination". By the end of the year he'd been elected chair of the club. He was going to do judo, following his dream to wrestle. But the streetwise aspect of ju-jitsu attracted him.

"There's more nastiness in ju-jitsu," he adds. It's not surprising. The sport was developed by the Japanese samurai...

"Your response is determined by what's thrown at you," Koloko explains. "Ferocity meets ferocity."

If you can't break a grip, distract your opponent. Grab their ears, or kick their shin, or even lock their fingers in a painful grip.

Ju-jitsu works at self confidence, honing the physical and mental senses.

(The club meets every Wednesday from 16h30 to 18h30 and Friday from 18h30 to 20h30 in Sports Hall 3 in the UCT Sports Centre. Members also have access to other ju-jitsu training facilities at the Valkenberg and Tokai dojos.)