Performers let their fingers do the talking 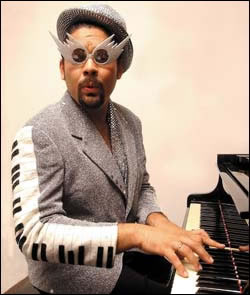 Jeremy Quickfall as Roelof Colyn in Handful of Keys.

Returning to Cape Town for the third time, Handful of Keys opens at the Baxter Theatre for a season from August 30 until September 25.

Originally conceived and performed by Ian von Memerty and Bryan Schimmel in 1994, Handful of Keys ran for three years, had more than 300 performances and played to more than people.

In 2001, the show entered its second incarnation, touring nationally as well as in London and Australia. Performing with Von Memerty was Roelof Colyn.

Now in 2005, Colyn returns to the stage but this time with UCT BMus graduate Jeremy Quickfall. Von Memerty said that after 600 performances it was time for him to move onto something fresh and challenging and, as the producer, he knew the show required very specific talents.

"I was not going to put the show on unless I found the right talent to match Roelof, who has grown into a truly accomplished comedian with an electrifying stage presence," Von Memerty explained.

"In Jeremy comes a bright new talent to ease into this smoothly-polished show. He has all the pianistic skills necessary to handle the extreme demands of the show, and as a part-time singing and piano teacher at UCT, he has all the musicality and vocal power needed to handle the range of material.

"Jeremy has a fantastic wide smile, 'big' energy to match his 1.8m-plus frame and the touch of madness required that will be carefully nurtured until he is truly insane," he added.

Quickfall studied piano from an early age and, while completing his degree, took part in many productions in various capacities. He has also worked as an accompanist with a range of people, including Rory Rootenberg, Aviva Pelham, Virginia Davids and Melanie Scholtz.

In addition to his part-time teaching at UCT, Quickfall teaches children at St Anthony's Roman Catholic Primary. He also runs his own vocal coaching school.

Quickfall says he is thrilled but terrified about the chance to do this show. He has been practising so hard, he says, that he has no finger prints left at all.

"Matching Roelof on stage is a delight and a challenge that I relish. I am also worried about filling Ian's shoes - well, he is a size seven and I am a size 11. But I am confident that by working closely with Ian, we can stretch his role so that it sits comfortably on my big frame."

Tickets are available from Computicket outlets, the Baxter on tel , and online at www.computicket.com. Prices range from R55 to R85, Tuesdays to Thursdays and for Saturday and Sunday matinees. Friday and Saturday evening prices range from R60 to R95. Discounts are available Tuesdays to Thursdays and include a 10% discount for students with a valid student card.

In celebration of the Week of Seniors, there will be a special price for senior citizens (R40 per ticket) on Wednesday, August 31, and Saturday, September 3 (15h00 performance).