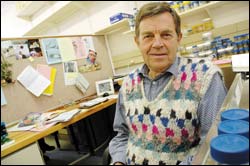 John Field, professor of zoology at UCT, has received the Gold Medal from the Zoological Society of South Africa (ZSSA) for his contributions to the subject in southern Africa.

The medal, presented to him at the ZSSA's June conference, salutes Field's often trailblazing work on marine ecosystems and the ocean's food webs.

For over four decades, Field has conducted research into the role that the physics of the ocean - currents, temperature, the presence of the pigment chlorophyl - plays on the marine food chain that begins with microscopic phytoplankton, and ends with large-scale fisheries. In more recent years, he has also been involved in countless studies into the effects of climate change on that food web.

Field's work has earned him spots on some high-level national and international bodies, such as the Consultative Advisory Forum (CAF) that reported to the minister responsible for fisheries management, the SA Scientific Committee for Global Change, the Scientific Committee on Oceanic Research (Scor) based in the United States, as well as Global Ocean Ecosystem Dynamics (Globec), which investigates the structure and functioning of the global ocean ecosystem.

Currently, Field is allied to the Global Ocean Observing Systems (Goos), an international programme that observes, models and analyses marine and ocean conditions to support services worldwide. One Goos project is looking into an early-detection system for tsunamis.

As flattering as the ZSSA gold medal is - it is recognition by his peers, after all - it also belongs to the many people he has collaborated with over the past decades, says Field. That includes his UCT colleagues from the Department of Oceanography, with whom he has been involved in a score of projects. Like the ongoing Idyle, short for the Interactions and Spatial Dynamics of Renewable Resources in Upwelling Ecosystems programme, which also includes representatives from Marine & Coastal Management and the French Institute for Development.

"In my case," Field says, "the work is not just mine, because I've always worked in teams."