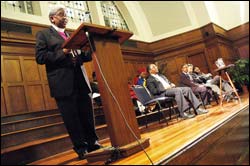 This is an abridged version.

It is a great privilege and delight to give the Inaugural Memorial Lecture in honour of my dear friend Jeffrey Dumo Baqwa. It was as a struggle leader that he first touched my life. At the heart of the Black Consciousness Movement, at the heart of Jeff's vision for our country, was a deep commitment to what it means to be truly human.

It was a hope for the future that was rooted in dreams, not of an unattainable utopia but of a new South Africa with an equal place for everyone. A South Africa that would demonstrate the values that ennoble every human being. A South Africa where we can have faith to go on hoping and believing and working for excellence. A South Africa of respect for every citizen, and for integrity in every walk of life.

When we think of dreaming, it is not long before we turn to those famous words of Dr Martin Luther King Jr, from the 1963 march to Washington: "I have a dream!" He dreamed that oppressed and oppressor would become equals. He dreamed injustice and oppression would give way to justice and freedom. He dreamed that we would be judged not by the colour of our skins, but by the content of our character. We might say, he dreamed of a society where we would all be fully human. Those dreams are not so far from Jeff's dreams.

What do we mean when we speak of values? To be fully human is to be more than a number in an ID book; more than an unemployment statistic; more than a debit in the social grant account; more than a figure in transformation data tables; more than a voter whose right to place a cross on the paper is forgotten until the next election looms.

Here in the University of Cape Town, you will not be surprised to hear me say that education is surely the most powerful potential engine we have to achieve this goal. All of us can do it in small ways - building bridges of hope for the future as we relate to the people around us. Some of us are called to do it in larger ways - to be leaders in our various fields.

There are two aspects I want to stress. The first is to ensure that the concept of servant leadership does not slip through our fingers. Those at the centre must guard the interests of the marginalised.

We must keep pressing for openness and honesty in public life. The elected and the officials who support them, are there as public servants, not to play with power and pursue self-enrichment. Only the highest ethical practice is acceptable. Corruption and wheeler-dealing must have no place - neither in public life nor in business.

When we speak of values, we must not forget family values. Earlier this year an extensive survey was done on the sexual behaviour and attitudes of the young people, 12-19 years old, in Anglican Church youth groups in the Western Cape area.

The Christian creed says that faith means "to believe and trust". We can believe all sorts of things - but what difference do they make to the way we live? At a time when religious extremism is in the news for all the wrong reasons, let me say a little more about what faith should be. Faith is about hope, about human flourishing, about making space for every unique individual to grow into their God-given potential, in harmony with one another. Faith is not a straight-jacket. Faith is not a set of imposed and constricting rules.

Respect means to treat others as we would like to be treated ourselves. I came to know Jeff once again when he and I were appointed Commissioners for the National Poverty Hearings. We listened to the voices of the poor, who told their stories with dignity. Their message was this: "Take our voices to the corridors of power, and say for us: 'We do not want hand-outs; we have brains; we have hands. Give us the capacity to eke out our own existence'."

Jeff had a great heart for the poor, great compassion. From the hearings came a deep concern to work for the eradication of poverty. He was instrumental in setting up groups to look at what could be done.

Some of that momentum was lost with his death. I hope that through occasions such as this, we can rediscover his compassion, and be moved, as he was, to advocacy and to action.

The lecture was named in honour of the late Prof Jeffrey Dumo Baqwa, the first incumbent of the chair of primary health care in the Faculty of Health Sciences and also warden of Forest Hill residence. He died in 2001.