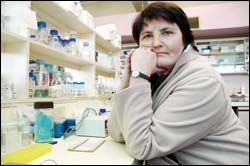 Rebirth: Prof Sue Kidson delivered her inaugural lecture two weeks ago, the first in two years from the Faculty of Health Sciences.

When Jaffa had to be spayed, it was obviously shaved around the bits where the vet was going to be cutting. The operation went just fine, but Kidson, then a postgraduate at Wits University, noticed that the cat's hair grew back darker on the spots where it had been shaven.

Her curiosity piqued, Kidson sought out tried-and-tested evidence to support her own anecdotal observations. She found it in the pathbreaking Iljin and Iljin paper, published in 1930, Temperature Affects on the Colour of Siamese Cats. In their article the two Russian scientists showed that the cold - Jaffa's bare spots were obviously more exposed to the elements - boosted the production of melanin (or pigment), the substance that gives colour to the skin.

Kidson had the chance to run her own studies, based as she was then in the Wits laboratory of Professor Barry Fabian, the doyen of developmental biology in South Africa. Here she found she could repeat the Siamese results with Himalayan mice - the lower the temperatures, the darker the subject mice's fur grew, while those mice stuck in the lab's hothouse went lighter.

That was just the opening ante to her research. Kidson's interest these days lies in the development of the eye and associated abnormalities, as well as general pigmentary disorders, such as albinism and vitiligo.

While at Wits and, since she joined UCT in 1987, Kidson has conducted and supervised a patchwork of projects, all aimed at finding out, broadly, how melanin does what it does. Pinning down that process would allow scientists to understand - and find treatments for, where necessary - conditions like albinism, where a lack of melanin results in characteristics such as pale skin, white hair and red eyes, and vitiligo, a disfiguring skin condition that produces white patches because of melanin loss.

In delving for answers, Kidson has taken an evo-devo - or evolutionary developmental biology - approach, through which evolutionary-biologists seek to understand how organisms evolve and change their shape and form, believing that clues to those changes can be found in the developmental mechanisms. For their studies, Kidson and her researchers work with the garden variety chicken egg, well suited for genetic and experimental manipulation.

In the eggs' embryos, the scientists track the pathway of the cells - true stem cells - from the moment they leave the neural tube (the structure in early foetal life that develops into the brain, spinal cord, spinal nerves and spine) and make a beeline for all corners of the body to take on their respective tasks.

"The question," says Kidson, "is how do cells know where they are going? Do they randomly wander around and then eventually find themselves a spot and differentiate like that? Or do they navigate? Do they know exactly where they're going because they've been told where to go?"

Kidson and those in her lab are particularly interested in how melanocytes, the migratory pigment cells located in the skin that produce melanin, are formed from the original stem cells. And they've already come up with a few pieces of the puzzle.

They've learned a few things about the enzymes in melanocytes that initiate the production of melanin, and the biochemical and genetic switches they believe control the migration of the cells. They've also identified a few of the some 80 genes suspected to have a hand in the process.

But there's still a long way to go, says Kidson.

"In many ways, this is very much a basic-science type project. Every time you answer one question, you raise another ten."

Prof Kidson's inaugural lecture is the first in the health sciences' revived series. Since 2003, when the faculty had its last such lecture, there's been a growing backlog because of the nearly 20 professorships awarded in that lull. Here are the rest of the lectures the faculty has lined up between now and September: August 10, Professor Gary Maartens of the Division of Pharmacology; September 21, Professor Richard Hift of the Clinical Skins Centre; September 28; Professor Raj Ramesar of the Division of Human Genetics.