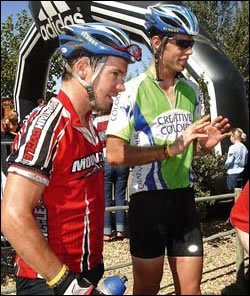 Rough riders: Lloyd Priestman (right) with Johan Greef at the Cape Epic mountain bike race. Priestman is only 19 and competed against top local and international riders.

This after he rode more than 900 punishing kilometres and climbed more than vertical metres during the largest full-service, eight-day mountain-bike stage race in the world - the Cape Epic.

Held from April 2-10, the race led over 800 mountain bikers from 29 countries through the scenic Western Cape. The race started in Knysna and ended at the Spier Wine Estate in Stellenbosch.

Not only did he complete the race, but Priestman and his partner Johan Greef finished 10th overall (out of 433 two-man teams). The team also placed in the top 20 in all eight stages, with a best position of fifth during the seventh stage.

A remarkable achievement considering that Priestman is only 19 years old and the team was competing against top-notch local and international riders. Of the 20 cyclists making up the top 10 teams, only eight were South African.

Having completed his first Argus Cycle Tour at the tender age of eight, Priestman says his love of the sport just grew more competitive each year.

"Some days are hard and I question why I am doing this, but having a good ride or an amazing training day makes it all worthwhile in the end and that's what keeps me on the bike."

But for Priestman completing his degree is a priority.

"If after getting my degree I decide I want to continue with my riding, then I'll do it properly and go to Europe. I'm still young and have time as most professional cyclists' careers only peak in their late 20s and early 30s."