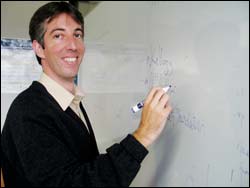 Tik or methamphetamine, part of the amphetamine group of drugs, potent and easy to make, was first discovered in Japan in 1919. It's still legally produced in the United States in the guise of medication prescribed for weight loss, as a nasal inhalant and even for narcolepsy and attention deficit hyperactivity disorders.

On the Cape Flats it is responsible for the fastest addiction rates ever seen in the those communities associated with gangsterism, notably Mitchells Plain, Manenberg, Elsies River, Hanover Park and Retreat, surpassing mandrax as the drug of choice and presenting short- and long-term health and social hazards.

"Nowhere else in the world has tik taken off in the way we are finding in these specific communities," said Andreas PlÃ¼ddemann, senior scientist at the Medical Research Council's (MRC) Alcohol and Drug Abuse Research Group and a PhD student in UCT's Department of Mental Health and Psychiatry.

For his doctoral thesis, PlÃ¼ddermann is designing a longitudinal study on tik users, documenting the effects of the drug on their mental health and behaviour.

Easy to ingest, popularly from a light bulb heated from below to produce fumes that can be inhaled (apparently even the bulbs from rail traffic signals will do), tik produces the characteristic rush that spawned its more sinister name: speed.

According to the director of a large treatment facility, tik gives adolescents what they don't have: confidence, power and heightened sexual levels, the feeling of being on top of the world, especially if that world is ordinarily dominated by gangsterism, unemployment and poverty.

Tik affects dopamine primarily (as does alcohol), a neurotransmitter linked to pleasure and reward, and is thus highly addictive, one of the most psychologically-addictive drugs around.

"The drug is like a companion telling you that you're good enough, handsome enough, smart enough, banishing all the little insecurities in your subconscious," wrote journalist Karl Taro Greenfield of his experiences with tik in Asia, where it has overtaken heroin usage.

"It's a special problem," says PlÃ¼ddemann. "Adolescents, the 12- to 19-year olds, react very severely to tik. The fallout is serious."

By over- exciting the central nervous system, users feel paranoid, fearful and anxious, reporting sweats, chills and exhaustion. The effect of tik on the brain can also induce a tremor similar to Parkinson's disease. Users can also become psychotic and delusional.

Not least of the fallout are strokes that cause memory loss, the former associated with large doses of the drug. Tik is also a sexual stimulant and will certainly intersect with the transmission of HIV through unprotected sex.

The longer-term effects through prolonged use are no less severe: weight loss, dental and skin problems and the potential for cardiac arrest.

The MRC runs a project called the South African Community Epidemiology Network on Drug Use (Sacendu) in six South Africa sites, including Cape Town. This has found that the demand for drug treatment for problems relating to tik is substantially greater in the city than other parts of the country.

Findings from 28 Sacendu-linked drug treatment programmes in the city show that of the 2 308 patients treated for substance abuse in the second half of 2004, 27% were under the age of 20.

But even more sobering is that of all the patients treated in the second half of 2004 who had tik as their primary substance of abuse, 60% were under 20. Another massive shift is that 59% of addicts under 20 have tik as a primary or secondary drug of choice, that is one in six out of every ten patients.

"Since 2004 there has been a sharp surge of people coming forward for help, such is the rapid addiction rate," says PlÃ¼ddemann. "This is extremely striking in terms of drug trends. Nothing else has taken that kind of sharp upward surge."

He warns that statistics from rehabilitation centres are just the tip of the iceberg.

The more difficult questions for researchers and educators don't always revolve around why the city's teens are drawn to tik ("The social aspects difficult to address.") but why educational efforts are failing so miserably.

"We're just not getting it right when it comes to the non-content education in our schools," says PlÃ¼ddemann. "We need to include substance abuse into our education. The life skills programmes are not hitting the mark. Educators must work with the kids, their teachers, principals, governing bodies, parents and the wider communities."

There are other aspects to tik that need special efforts. Consider that the backroom laboratories manufacturing the drug have to be cleared by teams specialising in biohazardous matter, such are the health hazards of the by-products in the process.

"There is an urgent need for research," he says, "not only to assess the prevalence of tik, but also to get a better understanding of the link between tik use and mental health problems and sexual risk behaviour."

Funding is being sought.