Evolution comes with a twist 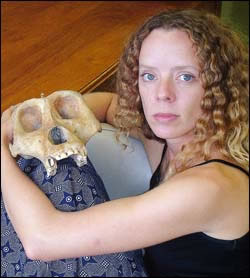 Digging up the past: A paper published by Dr Rebecca Ackermann and an American colleague could well open up some fresh debates in evolutionary thinking.

Among the forces said to have shaped human evolution over the past six million years, natural selection has long been reckoned as the alpha mover and shaker.

And for good reason. The bedrock of Charles Darwin's revolutionary theories on evolution, natural selection handpicks and passes on from generation to generation those genetic traits that best help humans - or organisms - survive their environments.

So, for example, selection acted on the earliest members of the human lineage around six million years ago, driving them beyond the trees and towards bipedalism (the ability to walk around on two legs). As a result, the bodies of human's early ancestors, including the australopithecines (australopiths for short), had to adapt to this new form of locomotion. In contrast to apes' relatively straight spines, for one, the australopiths sported an S-shaped curve to their spines, all the better for standing upright. There were also changes in their knees, feet, hips, and even their skulls.

But natural selection may not be the be-all of human evolution, say Dr Rebecca Ackermann, a paleoanthropologist based in UCT's Department of Archaeology, and Dr James Cheverud, of Washington University in the US, in a paper published online in the Proceedings of the National Academy of Sciences (PNAS) at the end of 2004.

Importantly, the authors argue, natural selection does not fully explain the diversity of facial features found in the genus Homo (to which modern humans also, of course, belong).

In their study, Ackermann and Cheverud looked at patterns of facial variation both within and between members of the genus Homo and australopiths. They did so by measuring a series of facial landmarks common to seven fossil skulls dating back to the Plio-Pleistocene period, from about 1.8 to three million years ago.

The researchers used quantitative evolutionary theory, combined with living models of variation drawn from modern-day adult humans, gorillas and chimps, to compare diversity within and among different fossil and modern groups.

Not featured in Darwin's original theories, genetic drift, say scientists, can (randomly) result in a specific trait - the size of the lips, the colour of the eyes - either disappearing from or mushrooming in a population, without much thought to that feature's survival or reproductive value.

Archaeological evidence shows that around 2.5 million years ago, human ancestors (and especially the earliest members of the genus Homo) developed the first tool technology and began to process their foods. They thus did not need natural selection to hew their faces to their environment, as there was no call for large jaws or molars to rip through tough meat, for example.

"Some features simply became functionally unimportant," says Ackermann. As such, certain traits could evolve more or less by chance.

"If selection is not acting on our faces, they are free to vary randomly," adds Ackermann. "Differences in nose shape or eye shape or whatever could just be natural (random) variation, and have no 'meaning' biologically."

The PNAS paper is but the opening ante for further research into the role of genetic drift in human evolution, says Ackermann. The scientists' methodology could, for example, easily be applied to looking at diversity in later members of the genus Homo, such as Homo neanderthalensis (Neanderthals). Researchers have long quarrelled over whether or not modern humans and Neanderthals mixed and mated when, around 100 000 years ago, the former moved from Africa into the Middle East and Europe, where Neanderthals flourished for so long.

Scientists have traditionally assumed that some characteristics of Neanderthal faces - their big noses in particular - are the result of natural selection, and are adaptations to cold climate, Ackermann notes.

"If genetic drift has played a key role in shaping diversity in early Homo, we need to consider the possibility that Neanderthal faces were not cold-adapted at all," she says. "Because we tend to think of such adaptation as being a derived trait, that is, a trait which has caused Neanderthals to be so different from modern humans that there is in a sense no turning back (and no interbreeding), were Neanderthal variation both random and essentially meaningless (biologically, anyway), that alone could remove another barrier to them being really different from us."

In their paper, Ackermann and Cheverud may well have shown that evolution can't always be taken at face value.