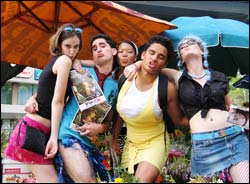 Once a year young men from good homes everywhere throw open their mothers' wardrobes in search of risquÃ© apparel. ("You're not wearing that out of the house!") Anything to sell Sax Appeal, dressed to the hilt as Saxxy Supermodels.

Sales went well. People were mostly friendly, but some of the city's grumpier citizens wouldn't even make eye contact, one student complained.

Not to be put off by the fact that the Monday Paper already had a copy, we were set upon by one Benjamin Brodovcky. "But what about your children?(indignant) Your cousins? (hopeful wiggle of eyebrows) Your mother? (coercing sotto voce) Your distant relatives?"

It wasn't hard to guess, Brodovcky is studying business science. He has a promising career ahead in sales, but his colour coding needs attention.

And then, amid the festivities around the fountain in Main Rd, Rondebosch, came the distant sounds of tinkling bells, cymbals and drums as a group of Hare Krishnas joined the throng, dancing and shuffling their way across the intersection. Just for a moment they stole the thunder from the undergrad cross dressers in impossibly high heels. The students were bemused, the motorists confused, the flower sellers open-mouthed. Were they were part of the show?

"Give them some Sax Appeals to sell!" someone shouted. Probably another business science undergrad.