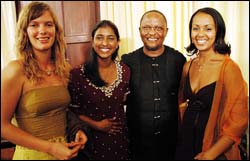 Women on the move: Vice-chancellor Prof Njabulo Ndebele is over the moon that three UCT students, (from left) Julia Cloete, Sirika Pillay and Alex Salo are among the winners of the inaugural Mandela Rhodes Scholarships.

Even if it didn't carry a handsome purse (and this one does), any scholarship that bears the clout-heavy brand names of both Nelson Mandela and Cecil John Rhodes would be a must-have for any student CV. And, by association, for any university.

So UCT should be tickled pink that no fewer than three of its students were among the eight named by the Mandela Rhodes Foundation, a partnership between the Nelson Mandela Foundation and the Rhodes Trust established by the will of Cecil John Rhodes, as the winners of its inaugural Mandela Rhodes Scholarships. Julia Cloete (23), Sirika Pillay (21) and Alex Salo (21) - the only women among the winners - were certainly beaming.

And why not. The prized and princely Mandela Rhodes Scholarships aim to build leadership capacity in Africa by providing "exceptional educational opportunities" to a select band of students who shine both in the classroom and in leadership positions. "We're looking for almost impossibly talented people," said Shaun Johnson, CEO of the foundation.

The students' grins also had a lot to do with the one-on-one chats they enjoyed with patron Mandela at their official coming-out press conference and dinner in mid-February. Cloete, Pillay, Salo and the rest of the 2005 Mandela Rhodes Scholars - two from Stellenbosch University, two from the University of the Western Cape and one from Cape Technikon - met Mandela and other foundation officials on the evening.

Naturally, the students were overawed by the icon. "You are not just my hero, you're my role model," gushed Pillay to the winning-as-ever Madiba.

For Salo, who turned 21 just days before the meeting, the high-profile affair with the likes of Mandela, UCT Chancellor GraÃ§a Machel and Professor Jakes Gerwel, was scary at times. "This was quite a new experience for me, sitting at a dinner table with all these big names," she says.

But now that the hoopla's wrapped up, it's back to the grindstone. Cloete, a former Shawco president, starts on her honours in anthropology. Pillay, who had previously landed a grant from the National Research Foundation, kicks off her honours work in microbiology. And Salo, once a chairperson of her school's Amnesty International Society, begins her honours degree in infectious diseases and immunology.

For this year, at least, the three can throw themselves into their studies and not worry about who'll be footing their UCT bills. The scholarships cover the cost of their studies and accommodation, and also come with a small allowance.

But for more than just the money, the scholarships have put a new spring in the students' steps. "Having someone like Nelson Mandela as a patron," says Cloete, "with his values and ideals and life work, is very inspiring."

The big man would be glad to hear that.

The Western Cape institutions are the first to receive the scholarships, and the only ones for 2005. The foundation plans to roll it out to at least one more province in 2006.