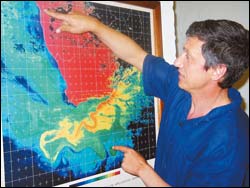 Ocean watch: Dr Mathieu Rouault of the Department of Oceanography at UCT keeps track of the developing Beguela NiÃ±o.

Dr Mathieu Rouault likes to watch the weather. As an oceanographer, he has an abiding professional interest in its whimsies, but as a surfer, he is more single-minded.

"The ocean is my passion," says the Brittany-born scientist who comes from a long line of mariners. His father is a naval officer and Rouault junior completed his PhD at the portside Marseilles University.

"I managed to turn my passion for the sea into a profession," he says, adding that he arrived in South Africa in 1992, in time to see apartheid washed up. He had turned down an opportunity in France so he could come south, where he felt he would be more useful.

"Here, my work has an impact on society because it is directly related to the problem of water resources."

As a scientist, Rouault is fortunate in this regard. This impact has been outlined in many papers, mostly related to the role of the oceans on southern African weather and climate. For instance, seven of eight of the worst droughts in southern Africa happened during the mature phase of El NiÃ±o in the Pacific. With co-workers he has demonstrated that the impact of El NiÃ±o on Southern Hemisphere rainfall has increased during the last 25 years. As a result the spatial extension and intensity of droughts has considerably increased in southern Africa.

Rouault has devoted himself to understanding the physics of these ocean/atmosphere exchanges and the implications for climate using numerical models, satellite remote sensing, climate data and observations made during cruises such as the GoodHope line. The GoodHope venture aims to beef up scientific knowledge by tapping into a programme of regular observations, an intense monitoring line across the Southern Ocean between Africa and Antarctica.

Rouault was also instrumental in unravelling the origins of Benguela NiÃ±os, terrible twin of the better-known El NiÃ±o in the South Pacific. During normal years, the seas off the west coast of southern Angola and Namibia are cold due to upwelling and nutrient-rich water, attracting a large commercial fishing industry. But during anomalous years, when the Benguela NiÃ±o hits this coast, a warm nutrient-poor current propagates southwards along the coast with devastating results for fish and marine animals. The 1995 Benguela NiÃ±o event saw seas up to 8o C above average. It also led to terrible floods in Angola and northern Namibia.

It was UCT honorary Professor Vere Shannon who first recognised the phenomenon and coined the term. Changes in the winds in the equatorial Atlantic trigger a Kelvin wave that propagates eastwards along the equator and then bends southward towards Angola. For some reasons still unknown, the Angola current becomes subsequently stronger than usual and spreads as far as 25 S. Rouault has developed a plan to monitor the phenomenon in real time in a similar fashion to that used to monitor El NiÃ±o in the Pacific. This will also provide the necessary data to understand the missing link between equatorial dynamics and Benguela NiÃ±os.

In the 1990s, a series of instrumented buoys were deployed in the Pacific Ocean, and later extended to the tropical Atlantic Ocean when France, Brazil and the United States took on the task of developing Pirata, the Pilot Research Moored Array in the Tropical Atlantic, consisting of 12 buoys moored between and .

According to an article on the Science in Africa website, three extensions to this system have been proposed, one of which is the south east extension (See). Two buoys would be positioned in the waters off Angola. Rouault is chair of the Pirata-See committee and has also completed a feasibility study on the extension of the Benguela Current Large Marine Ecosystem (BCLME) programme. A joint initiative of South Africa, Namibia and Angola, funded by the Global Environment Facility, its participants met in Cape Town recently.

Its work will be vital to predicting the droughts and floods affecting farmers over the sub continent and to the vast fisheries along the west coast.

Rouault has also done some work on global warming; this time it was the atmosphere that affected the ocean. Certainly, the world's oceans are warming, the repercussions staggeringly evident on the Marion Island ecosystem.

"Fifty years of oceanographic and metrological measurements have made the island unique in the world. This shows that rainfall on Marion has decreased 25% over 30 years, non-rainy days on the island sanctuary have increased from 25 a year to 75 and the air temperature has risen by since the '70s." These changes are linked to known changes in the Southern Hemisphere climate due to global warming and, most amazingly, the decrease of the ozone layer. This has lead to a shift in the storm track towards the Antarctic.

Given this evidence of ocean atmosphere interaction's impact on society, it seems odd that the oceanography department at UCT is the last of its kind in Africa. On a continent ravaged by drought and flood, it's hard to believe that UCT is the last incubator of this knowledge.

The last port in a storm.