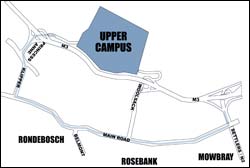 UCT's RAG float procession, associated with Adderley Street for most of the last century, is to move to Main Road in Rondebosch and Mowbray in 2005.

The rationale for the move includes traffic congestion in Adderley Street, and a desire to encourage students to become more involved in this annual event, which will now take place in the heart of the university precinct.

Dave Bryant, RAG executive committee member, said: "We are very excited about the prospect of moving the procession closer to the university community. It's a way of integrating all spheres of the university and we hope to encourage a greater sense of ownership of the event among students."

Local ward councillor Owen Kinahan enthusiastically supports the initiative. "I think it is an enormously positive step towards establishing closer ties between UCT and the local community. Bringing RAG to the university's own front yard will encourage more than 10 000 students who live here in residence or in digs to take an active part in the event. It also gives the locals a chance to join in the first big event of the university year."

The float procession is scheduled for the afternoon of Saturday 12 March, 2005, starting at 16h00, and will join Main Road at Princess Anne Drive/Klipper Road and travel through the CBD's of Rondebosch, Rosebank and Mowbray, ending at Forest Hill around 17h15.

The successful Mowbray Fair, launched last year, will be held on the same day at the Mowbray Town Hall in an activity-filled day geared towards the whole community, and in particular, new UCT students. The flea market is to be offered exclusively to fundraising initiatives for local schools, charities and NGOs.

"It's a great challenge for UCT RAG to rebrand the event in a new location but I am confident that the characteristic generosity of Capetonians and good neighbourliness of the host community will produce a really good mardi gras that will take its rightful place in Cape Town's calendar each year," said Kinahan.