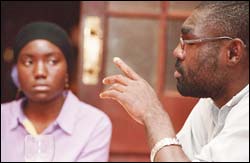 Debate on notions of education as commodity

On November 12, UCT joined other institutions around the continent in commemorating African University Day, designed since it was first launched in 1994 to celebrate the role of universities and higher-education institutions in developing and promoting African unity. At the beck of the Association of African Universities (AAU), institutions hosted discussions around Cross-border provision of higher education in Africa: opportunities and challenges, part of the theme to be raised at the AAU's 11th General Conference in Cape Town in February next year. At UCT's African University Day event, hosted by the International Academic Programmes Office, students bandied thoughts on the topical but knotty issue of the liberalisation of education services and its exchange, along economic lines, among African nations. Of particular interest to those present was the recent inclusion of education services among the commodities to be traded under the auspices of the General Agreement on Trade in Services (GATS), an issue that rankles many.

Don't write the oil industry off just yet. That was the gist of the World Petroleum Congress - The First Youth Forum held in Beijing, China, in October. Delegates from around the globe, most under 35, met to talk about where the embattled industry is heading. It's not all doom and gloom, said speakers at the event, sub-themed Youth and Innovation - the Future of the Petroleum Industry. Oil should be good for another 40 years given the current rates of use and discovery, and there should be enough natural gas around for at least the next century. That's good news for the likes of Justine Tinker (below, fourth from left), a UCT doctoral student in geological sciences who was included in an eight-strong South African group, thanks to last-minute funding by the SA and Chinese committee of the World Petroleum Congress. The visit taught Tinker a lot about an industry she is considering entering sometime soon. And, of course, she got to see China - Tiananmen Square and the Forbidden City were but two of her stops. "It was a great opportunity to experience a part of the world that will be an increasingly important player on the world stage," she says.

The increasing power of women has a profound effect on South African society and the commercial world we live in. The UCT Unilever Institute of Marketing's gender seminars are being held during November. These seminars explore the changing concepts of masculinity and femininity in South Africa and examine the marketing implications of these challenges. You can book a place at the Cape Town session, scheduled for November 26, from 08h30 to 12h30 at the Old Mutual Business School in Pinelands. Contact Denise on or e-mail unilever@commerce.uct.ac.za.

In a first, the Graduate School of Business' (GSB) part-time Associate in Management (Aim) class raised R25 000 for a new scholarship in 2003, money to go towards the studies of one or more students on Aim this year. That was but one of a number of projects the class ran as part of the social responsibility component of their programme. This year, the part-time and modular Aim classes, after joining forces, are upping the stakes. Having enjoyed the fruits of last year's scholarship, they decided to set up a similar one, just bigger. And they needed just one snazzy do at the BMW Pavilion in October to outgun their forerunners, raising all of on the night. In addition to selling corporate tables to Southern Sun, Shell, Eskom, Nedbank and Ernst&Young, among other heavyweight companies, the class also auctioned off an autographed Springbok team shirt donated by SA Rugby. Other sponsors chipped in as well - Pick 'n Pay supplied the evening's juices, the BMW Pavilion threw in the venue and the weekend "hire" of a BMW convertible, and the Relais hotel group whisked two lucky winners off for a weekend bed-and-breakfast treat. The class isn't done just yet. Among other things, they hosted a Christmas party for children from four surrounding orphanages, and are also organising a raffle that they hope will be good for a few thousand rand more than they already have in the kitty.