Flame of learning will provide "fire that cooks" 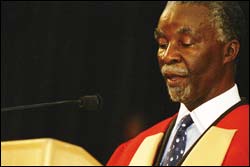 Africans have to work together to recreate the great spirit of the African University, President Thabo Mbeki said in his distinguished inaugural lecture of the Association of Commonwealth Universities. But in order to give birth to the new, Africans had to be angry at their past. This is an edited extract from his lecture.

Institutions of higher learning can only make a meaningful contribution to the development of society if they work in partnerships among themselves and with other sectors.

In this regard, I think the value of this occasion is embodied in the partnerships demonstrated in a number of instances. The first is domestic. The University of Cape Town celebrates its 175th anniversary during the 10th anniversary of our country's new democracy. The coincidence focuses our imagination on the connection between the past and the future in the life of a country and its various institutions.

On the one hand is the perspective of 350 years of modern history that has seen our country and the entire continent through the prism of conquest, colonialism, industrialisation, and independence. On the other hand is the life of institutions within that larger perspective. Today we celebrate the resilience of one institution, which has survived through many phases of our national history.

In the second instance is the partnership between the University of Cape Town and the Mandela Rhodes Foundation, dedicated to making a meaningful contribution to the historic task of rebuilding Africa's leadership capacity through, among other important programmes, the scholarship that has just been announced.

In this, its aims are at one with the goals of the New Partnership for African Development. We hope that the Mandela Rhodes Foundation will play a catalytic role in ensuring that at all levels we produce leaders who will help to make the 21st an African Century.

To place the names of Mandela and Rhodes side by side in this manner is an unusual yet innovative thing to do. It is perhaps a practical way to give expression to our constitution's injunction that we come together across historical divides, for the benefit of present and future generations. It is a way of making history functional and alive, rather than just some inanimate thing to be looked at, and in our case lamented. In this case, those aspects of Cecil Rhodes's otherwise contested legacy which can be put to work for the good of Africa, are being harnessed - in particular the legacy of his desire for excellence in education and entrepreneurship.

In our particular context, the pairing of a Nelson Mandela and a Cecil Rhodes drives home the significance of the link between continuity and change in the history of nations. While Rhodes and his peers opened up Africa to European colonisation, Mandela and other African leaders sacrificed for the restoration of Africa to itself.

The project to help build Africa's leadership capacity has been underway for sometime and has taken many forms. I invite you to explore this process further, beyond this lecture. But it is a matter of sadness that Africa was unable to sustain such intellectual ferment as was present in the many universities on the continent during the period of decolonisation. It seems as if the African University lost its spirit and its soul in the last two decades or so.

The soul of the African university died, in part, with the decline of the modern post-colonial African state as one country after another fell under military rule and other forms of unrepresentative government, which severely limited the capacity of Africa to take advantage of the genius of its peoples. It is for this reason that we should reflect on the recent democratic developments on the continent and see whether we cannot begin, once more, to deploy the available collective wisdom and capacity of our people for the development of our countries.

I would suggest that our entire continent remains at risk until the African University, in the context of a continental reawakening, regains its soul. Among other things, a successful continental reawakening requires multiple sources of creativity. The collective mind that produces our proverbs should enable the greatest numbers of the citizens of Africa to participate in productive activity driven by their creative genius.

The unlocking of this genius will require, among other things, that we eliminate gender discrimination and oppression. The programmes pioneered over the past twenty years by the ACU to enhance the participation and profile of women in the governance of universities will need to be intensified in the new global partnership, to enable African women to take their rightful place in our universities.

In this way, the new Africa can only be a product of the creative interface between the public, the private, and civic sector domains. It must win and enjoy the respect of the whole of society and must be accessible to all. In this context, a university should not be an enclave or an ivory tower whose curricula and programmes have little relation to the society in which it operates.

At the same time, education must be accorded recognition as a space for unfettered intellectual enquiry. It must be trusted for its critical objectivity, its quality and for its capacity for public accountability.

The spirit of the African University is more than the sum total of its outreach projects, now called social responsibility. It includes fully acknowledging and restoring dignity to the self-actualising activities of teaching, learning, and the search for new knowledge; and recognising the capacity of the human intellect to liberate through questioning and disputation.

It includes finding cures for diseases that have depopulated our continent for centuries; and discovering inventive and sustainable ways of ending poverty through successful entrepreneurship. It also means making sure that in the design of our history syllabi, African history is not confined to the beginning and end of colonialism.

This spirit of African University should stimulate our imaginations and our sense of identity. Clearly, it includes restoring trust to academic leadership, academic leadership that sees as a central priority the development of university education that has at its heart a new kind of learning and teaching that fosters active citizens inspired by a healthy African pride.

I believe that effectively to give birth to the new, we must be angry at our past. In this context I now leave you with one more proverb, this time from Lesotho: "No matter how hot your anger may be, it cannot cook". The African university should make the real fire that cooks.