No item too big or too small for suspect 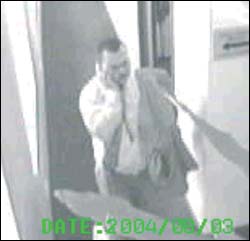 At large: A photograph of Elston Shawn Victor taken from surveillance footage.

Campus Protection Services (CPS) have asked the university community to be on the lookout for a suspect wanted for various thefts both on and off campus.

The police have issued a warrant of arrest for Elston Shawn Victor, with ID number 6712310101088 and last seen driving a red VW Jetta with registration number , after he was identified in separate incidents.

From as far back as October 2001, Victor has been operating on upper campus where he stole a staff member's credit card which he used to purchase clothing and jewellery at the V&A Waterfront. He also pilfered a conference delegate's bag in July 2003 at the Graduate School of Business (GSB) and gained access to her room where he removed various items.

According to Patricia du Plessis, a supervisor in the crime investigations department, Victor was seen hiding the bag under his jacket and "elegantly leaving the venue".

In a more recent incident, Victor entered the Mowbray Golf Club on July 31, 2004, after which a member's wallet disappeared and his credit card was used to buy goods worth from Hi-Fi Corporation in Rondebosch.

Going after larger items, the audacious suspect also stole a data projector from the GSB on August 3, 2004.

"He poses as someone attending a conference and remains in the venue after everyone has left. He then simply hid the data projector under his jacket," explained Du Plessis.

"As he is always smartly dressed, in a suit and tie and constantly talking on his cellphone, no one ever suspects or questions his presence."