Institute of ageing opens its doors 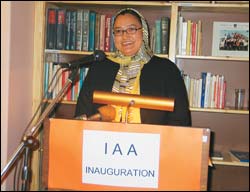 Singing their praises: Rosieda Shabodien-Rasool, wife of Western Cape Premier Ebrahim Rasool, addresses guests at the opening of the Albertina and Walter Sisulu Institute of Ageing in Africa.

Guests in the Old Main Building of Groote Schuur Hospital were treated to the soulful tunes of a choir of praise singers as they gathered to celebrate the recent establishment of the Albertina and Walter Sisulu Institute of Ageing in Africa (IAA).

As the only centre of excellence of its kind in sub-Saharan Africa, the IAA aims to address the critical issue of ageing in the 21st century and serve as a catalyst for local, national and regional expertise and a focal point for the development of services, training and research.

The IAA at UCT represents an amalgamation of three ageing specialities previously operated independently in the Faculty of Health Sciences, namely the Division of Geriatric Medicine, the Division of Psychogeriatrics and the former HSRC/UCT Centre for Gerontology.

Shabodien-Rasool said the IAA's partnership with community organisations should be commended.

"We need to ensure the elderly are supported, acknowledged and respected as they are frequently made vulnerable due to physical and mental abuse and inappropriate and inadequate provision of services.

"The name of the institute recognises two very special people and after 10 years of democracy we know we would not be here without their sacrifices," she observed.

According to the IAA, longevity and an increase in the number of older persons results in age-associated morbidity, and a heightened demand for scarce health and social care resources. And with the number of older persons in Africa set to increase from 42 million in 2000 to 204 million by 2050, African countries need to plan to respond proactively to the challenges of population ageing.