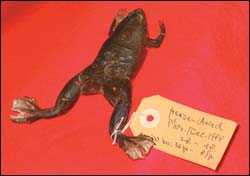 On display: the platanna frog from which the modern-day pregnancy test was derived, here at UCT.

As the tutus arrive, the three artists - Pippa Skotnes, Gwen Embden, and Fritha Langerman - pounce on them with delight. More treasures to add to an already burgeoning collection of artefacts gathered from around the university.

Ballet is but one of the many disciplines reflected at UCT, and the dance school has also come to the party, offering some of its costumes for the exhibition entitled Curiosity CLXXV: Curating the University.

Skotnes explains the rationale behind the exhibition, which will be housed in 175 cabinets in Hiddingh Hall, on the campus where UCT had its origins as the South African College founded in 1829. 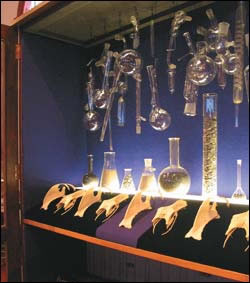 On display: one of the cabinets takes form

"Some time, at the beginning of the year, I got the message that the VC would like something from the performing and creative arts to celebrate the 175th anniversary. At first I thought of putting together 10 cabinets - one for each of the 10 years of democracy - but then once Gwen and Fritha came on board it suddenly seemed possible to do something more ambitious and now we are curating 175 cabinets."

The three women all have a similar background and training and an interest in museums and curatorship. Thus their interest is not only in the diversity of scholarship at the university, but in creating an exhibition around the theme of "curiosities", recalling the Wonder Cabinets of "gentlemen explorers" who travelled the world collecting strange and bizarre artefacts.

From the original idea they have traced the origin of this kind of display beyond the early modern to the mediaeval obsession with saints' relics, often regarded as objects of magical power. Dotted throughout are references to the clergy who had a big hand in the early formation of UCT. 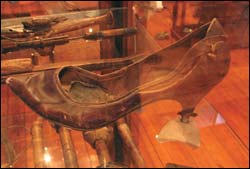 On display: ...and a stiletto shoe (courtesy of forensic medicine) once used as a murder weapon, complete with piece of skull bone still attached

Indeed, the curators of this exhibition did travel the university, ferreting out interesting odds and ends from all the nooks and crannies of this sprawling campus, finding it particularly interesting to discover where people worked and what they did. Embden claims they may well have seen 175 people in the process.

They also found a willing ally in June Hosford of the Iziko Mus eums who has been looking after UCT's collections there.

The result is a collection of enormous variety, gathered together under one roof in what was once an empty space, and which is now being put together in cabinets reflecting layers of meaning relating to the academic enterprise, with titles like "Quadrivium" and "Articulation". 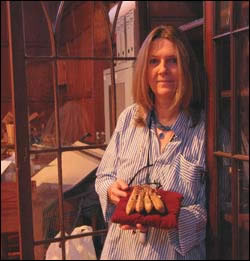 What the curators all agree on is that the exhibition consciously resembles the Pitt River Museum at Oxford University, only here they are playing with typology in very different ways. This is an "art" exhibition where art "resides in the curatorship rather than the making of objects".

Four television sets will also play interviews with Professor Maarten de Wit talking about the first million years of the earth's formation, Professor John Parkington and Cedric Poggenpoel talking about seasonality, DVC Professor Thandabantu Nhlapo on, among other things, customary law, and Dr Helen Moffett and Professor Tim Noakes on cricket. In addition, several people have been asked to write literary pieces to accompany the exhibition.

UCT research reports from the past 10 years are being cut into strips and sewn on to academic gowns, which the deans of the various faculties will be asked to wear at the opening. 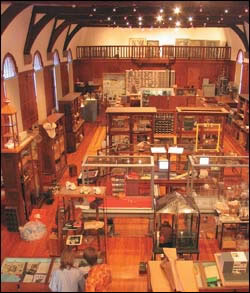 Exhibition hall: Once an empty space, the exhibition hall at Hiddingh campus is now filled with UCT memorabilia.

Among the cabinets you will find Lucy Lloyd's original display cupboard (Lloyd worked closely with Wilhelm Bleek on the recording of the stories of the /Xam people in the 19th century). The cupboard is Skotnes' personal possession, and she is delighted to be able to return to it some of Lloyd's books and skin instruments made for her by the /Xam, including a dancing rattle sewn out of springbok ears (on loan from the Kirby Collection, another UCT treasure).

From the Avian Demography Unit there are bird maps, which show that birds keep political boundaries (presumably because these boundaries have geographical features), and the sternums and pelvises of blue cranes.

One of the first people to offer his help was the now retired Professor Deon Knobel, former head of forensic pathology and toxicology, who contributed items like the stiletto shoe which was used as a murder weapon, complete with the bit of human skull it once penetrated. 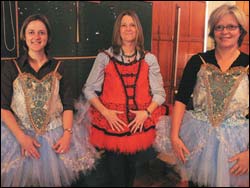 Tutu time: (From left) Fritha Langerman, Pippa Skotnes and Gwen Embden model the tutus on loan from the ballet school.

And in a cabinet housing containers you'll find the butterscotch tin belonging to the Registrar Hugh Amoore which houses his running medals.

"Objects have an extraordinary mobility of meaning," says Skotnes. "We hope that this act of curatorship will generate new ideas about UCT collections."

Curiosity CLXXV: Curating the University opens in November and will be on display until March next year.