Year of highlights and forgettable moments 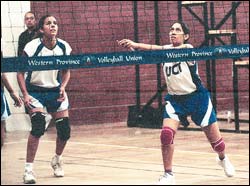 Hands up: Lameez Alexander and Vanessa Vanlappe in action for the women's volleyball team early in the season.

Year of highlights and forgettable moments .

Not quite up to trophy-winning form just yet, the club's sides did record a couple of memorable successes over the season. The women's first team was particularly devastating in the early stages, carving itself a reputation as the giant-killers of the Western Province women's volleyball league. In April, the team caused two major upsets within the stretch of three days, outclassing both 2003 champions South Peninsula VBC and archrivals the University of Stellenbosch. Then, in May, they also got the better of league leaders Saints.

According to women's captain and club chairperson Anneke Voigts, those wins pointed to the rebirth of a once great team. Such was the interest in the game that the women even pulled together a second side that joined the WP league after the mid-year break. Just before joining the league, this new squad outplayed all other comers in a high school tournament at Herschel Girls' School. "If this is anything to go by, ladies' volleyball at UCT seems to be thriving," said Voigts at the time.

Unfortunately, the women couldn't maintain this high, particularly after losing two international students - Jeannie Kenmotsu and Nina Lang - who returned home after a semester at UCT. The UCT teams are currently languishing at the wrong end of the WP log. Individual players did make their mark, however, and four team members from the first team - Lameez Alexander, Shafeeqa Salie, Lisa Womersley and Voigts, who also captained the side - were included in the Western Province squad that finished second to Gauteng in the mid-year Sassu tournament. And while the UCT women's second team is yet to pick up a win, the players are having great fun, noted Voigts.

In the meantime the men had an up-and-down season of their own, but recorded enough wins to feature among the top four teams in the league. Here too, players have put in stand-out performances. Lloyd Brady, Chris Mlotchwa and Shukrit Toefy, who picked up the tournament's best-setter award, saw WP to glory at the Sassu contest, beating Gauteng in the final. WP didn't drop a single set for the entire contest.

The past two years has been dedicated to rebuilding a UCT volleyball club that not too long ago was on the cusp of extinction, says Voigts. This year has seen growth in many regards - the club has drawn enough players to run four teams, there's more awareness of the sport around campus, and the sides have won the respect of the WP volleyball fraternity. "Overall it was a very successful year," says Voigts. "We've done the rebuilding. Next year we can start focusing on improving our playing."

And scaring up a few trophies.