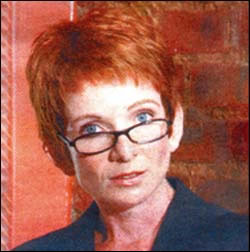 The Weakest Link host Fiona Coyne, eager to put dons to the test.

Fancy your broad range of knowledge? Blessed with a steady flow of repartee in the most confounding situations? Can you stand a little ribbing? Survive rejection? And will you remember to "bank" when the question swings your way? Then you may be the just what The Weakest Link is after.

As the programme enters its third season and due to popular demand, they're planning several themed broadcasts, one of which will be a show (drama? comedy? pageant?) hosting professors from various universities, who will abandon their esoteric intellectual enterprises for that undulating landscape of knowledge euphemistically described as "general".

The Weakest Link has been rated as SABC3's top locally-produced programme, described as "the anti-game show with a combination of Survivor and your best soap opera" - which, come to think of it, is probably a pretty handy description of academic life.

The core of the show is to have contestants with loads of personality (they did ask specifically for professors) with an ability to think on their feet, and a strong competitive streak as they try to survive being voted off while performing under Fiona's formidable presence. It all sounds like your average Senate meeting.

What's in it? The proceeds - if the contestants remember to bank as they go - will find their way into the winning university's coffers. They are scheduled to record the show in Johannesburg on Tuesday, November 9 at 13h00. All travel and accommodation costs will be arranged by TV production company Rapid Blue and the show is scheduled for broadcast in 2005.