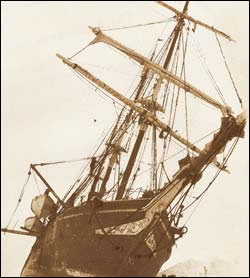 The Endurance lists in pack ice, photographed by expedition photographer Frank Hurley before it was claimed by the frozen Weddell Sea.

Fancy epic tales of derring-do and gallantry? Then the physics department will be glad to welcome you to a talk by historian Peter Wordie, titled Shackleton's Endurance - Escape from the Ice to Elephant Island.

The lecture is from 12h00 to 13h00 and will be held in the Duncan Elliott Seminar Room in the RW James Building.

Physics departmental secretary Lesley Jenninings, who is organising the lecture, says that the interesting aspect of this case is the close, lifelong friendship of Sir James Wordie with UCT's former acting principal, Professor RW James, following their experiences in the Antarctic during this voyage.

Their ship, Endurance, was beset and finally crushed by ice, leaving the men stranded. "This talk will give particular attention to their perilous escape from the ice, in three lifeboats, which brought them to Elephant Island in April 1916," Jennings continued.

Peter Wordie, she says, the youngest child of Sir James, graduated from Cambridge as an historian and found himself in Greenland researching Eskimo archaeology.

"His subsequent career, however, was to found a shipping company in Glasgow. He is an avid collector of his father's memorabilia, including his polar stamp collection. Michael Smith's book Sir James Wordie: Polar Crusader, Exploring the Arctic and Antarctic, completes a large gap in polar exploration history.

"Little has hitherto been known of the man who was president of the Royal Geographical Society and of the Scott Polar Research Institute and whose contribution to British exploration spanned almost 40 years." Please direct enquiries to Lesley Jennings on tel 650 3326.