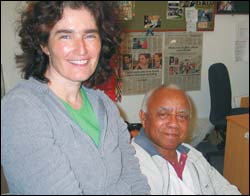 Children across Africa will now have the opportunity to read stories in their mother tongue or in the language of their choice thanks to a substantial grant from the Ford Foundation.

UCT's Project for the Study of Alternative Education in South Africa (PRAESA) has received approximately R4-million to bring to life a proposal titled Stories Across Africa.

Profiled as an important means to promote the popular intellectualisation of indigenous languages, the project plans to produce a collection of stories which can become a canon of children's literature across the continent.

"Beginning with the very youngest of children and those adults who interact with and educate them, we hope to establish and promote a culture of reading and writing in African languages as well as in English," said PRAESA director Professor Neville Alexander.

"We also hope that the project will give the sense of a continent that is awakening and uniting, and thus contributing to the concept of an African Renaissance."

According to Alexander, the promotion of unity has, up until now, been a top-down process facilitated by heads of states through organisations such as the African Union and the Organisation of African Unity.

Alexander believes this should be complemented by a bottom-up approach and this is the reason the project focuses on early childhood literature.

"Stories Across Africa brings together people doing the same thing in other countries and as such creates a network of creative people - people committed to a creative vision for our continent. The

ramifications will be immense."

PRAESA's Carole Bloch praised the Ford Foundation for their commitment to children's issues.

"It's good to see that some funders are paying attention to the need to make reading an enjoyable process for children, especially at a pre- and primary-school level, because this is an area that gets lots of lip service but has been lacking support for a long time."

Bloch pointed out that the expansion of human resource capacity will be integral and complementary to the story development process.

This will include training teachers and other caregivers to become informed about the potential of stories for cultural, entertainment and educational purposes.

"We will also train and mentor writers, illustrators, translators and editing personnel to produce appropriate, relevant and well-made books in African languages."

Founded in 1936, the Ford Foundation is an independent and non-profit organisation which makes grants and loans that build knowledge and strengthen organisations and networks.