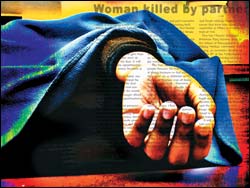 There has been a decline in the incidence of most violent crimes during the 2003/04 financial year according to a South African Police Services report released last week. But buried in the country's crime statistics are other alarming figures. According to a recent Medical Research Council report, South Africa has the highest rate of intimate femicide (women killed by their intimate partners) that has ever been reported in research anywhere in the world.

UCT's Professor Lorna Martin, new head of forensic medicine and toxicology, is one of six researchers who took part in the national MRC female homicide study*, which reveals that one woman is murdered in South Africa every six hours by someone she loves, someone with whom she has an intimate relationship; a husband, a common law husband, a lover or boyfriend.

"We estimate that 1 349 women were murdered by an intimate partner nationally that year," Martin said.

This means that four women each day are killed by known perpetrators. This group makes up half of the women murdered in this country and is the highest rate that has ever been reported in research anywhere in the world, says the report.

Data for 1999 were collected between March 2002 and December 2003 from sampled mortuaries, establishing a sample group of 905 female homicide cases with complete data. The research group's analysis was based on the cases where the perpetrator was established.

Little is known about who kills South African women and under which circumstances, but international studies show that intimate femicide is linked to a history of domestic violence, with the risk increasing at the threat of separation or actual separation.

Information on the occupations of perpetrators shows that they are more likely to be blue collar workers, farm workers and security workers. Statistics in the report also show that the victims of intimate femicide are mostly black women (76.4%), followed by coloured women (17.7%), white women (3.9%) and Indian women (2%).

Their medico-legal findings revealed that 2% of all female murder victims were pregnant and that in 15.3% of the cases, the women had been sexually assaulted. Samples were sent for DNA analysis in only 3.5% of the intimate femicide cases. In 21.2% of the cases that showed evidence of sexual assault, a genital swab was not taken.

The researchers also found several flaws in the medical and legal management of female murder cases and recommend that: