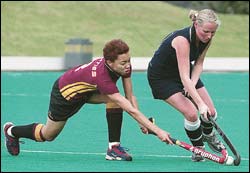 Sarah George (right) can't get away from Maties' Lenise Marais.

No escape: The odds were always stacked against them, but the women's hockey first team could not have foreseen the 0-7 hiding they received from the stratospheric Maties side on July 31. Before the match, coach Charlie Stuart had predicted a closely-fought encounter - and in the light of a narrow 0-2 defeat to Maties in Stellenbosch in the first round, this seemed a fair preview. Tell that to Maties, who have again proved nigh-on invincible this season (they've only let in one goal in 14 matches). "We were disappointed obviously," said Stuart after the match, "but I think there's also the realisation that we hadn't played anywhere close to our potential." Stuart should be proud of his plucky team, however. Even as the Stellenbosch tally mounted, the UCT women never stopped looking for a goal. And they created a number of scoring opportunities, only to be foiled by an unlucky bounce or a good save. UCT, with second position just about sewn up, has no chance of catching up with Maties, but will have pride to play for when the sides meet for their top-four round robin clash in a few weeks.

Soccer troubles: The UCT women improved on their efforts against Stellenbosch the previous week, but still went down 2-3 to Cape Town Madrid in their SAFA WP match on July 31. Zizipho Mmango scored both UCT's goals.

Netball joy: The netball first team finally got one hairy monkey off its back when it recorded its first win of the Super League season. The side beat Tygerberg B 44-37 on Wednesday, July 28. A recent reshuffle of players - piloted during a successful SASSU campaign - that included centre Keeyan Dick's move to goal attack had a lot to do with the win, says captain Palesa Mokomele. The side will hope the victory proves to be more than a false dawn, but will have to wait until August 19 to see. In the meantime, provincial games take top billing.

Mudslinging: UCT and Tygerberg are honorary patrons of the running rugby game. It has not been uncommon in previous tussles to see nimble back-liners scramble the length of the pitch for a try. But conditions on a wet and miserable UCT pitch on July 31 put paid to any hopes of a free-flowing game. Handling errors were the order of the day, although both sides scored two tries. The 15-15 scoreline at the end of the match may appear a fair reflection of the game, but UCT should have won the game comfortably, with a number of very goalable penalties not going over.