New physics needed to explain evolution of the universe 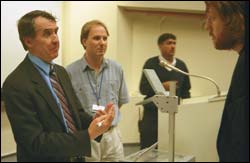 As technology has produced more and more revealing data on cosmic radiation produced after the Big Bang, so astronomers like the South African-born Professor Tony Readhead are finding that a new revolution in fundamental physics is needed to understand and explain the evolution of the universe.

Readhead, from the California Institute for Technology, delivered a public lecture, The Dark Side of the Universe, to a packed hall in the Leslie Building without missing a beat. It was hard to believe he had just stepped off a plane from the US, having spent 20 hours in the air.

The lecture was part of the National Astrophysics and Space Science Programme (NASSP) Colloquium Series. More importantly, Readhead's visit is connected to South Africa's bid to host the Square Kilometre Array (SKA) in the Northern Cape, one he is pleased the government is supporting.

Once completed, the SKA will be the most powerful telescope in the world, providing one square kilometre of aperture for radio astronomers, who use the relatively long wavelength radio waves that penetrate the atmosphere.

The SKA facility will differ from current technology in that it will allow cosmologists to study the universe in 3-D, yelding important, new insights.

"Progress [in our understanding] has come about because of the progress in technology and engineering," Readhead said.

The SKA's collecting area of one million square kilometres will be distributed over a numbers of "stations", perhaps as many as 1 000. According to its designers, the large collecting area is derived from the sensitivity the instrument needs to detect neutral hydrogen in the early universe. This neutral hydrogen dominated the early universe but signals reaching earth are very faint.

According to the website (www.ska.ac.za), the SKA will map the time evolution of this "cosmic web of primordial gas" as it condenses to form the first objects in the universe. "It will also chart the development of these adolescent stars and galaxies, which will provide us with information about our own origin. The atoms in our bodies, our planet and stars were formed by the nuclear reactions that powered these early stars."