Criminology book takes a glance back 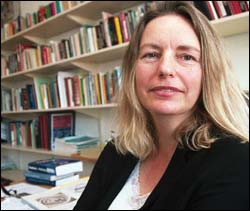 New eyes: In Justice Gained?, a new book co-edited by Bill Dixon and Elrena van der Spuy (above), the Institute of Criminology takes a fresh look at topics such as the link between politics and crime.

When Towards Justice? Crime and State Control in South Africa appeared in 1990, it may have smacked of political pamphleteering at times.

In that volume, a follow-up to its 1985 Crime and Power in South Africa, the UCT Institute of Criminology drove home the point of the first book, that crime in South Africa could not be divorced from politics, more specifically from the apartheid government's power to criminalise.

Fourteen years on and some three years in the making - and with no particular nod to the 10-year anniversary of the country's democracy - the institute recently toasted the release of the third book in the series, Justice Gained? Crime and Crime Control in South Africa's Transition. The latest instalment is edited by Elrena Van der Spuy, a senior lecturer with UCT's department of criminal justice, and a former colleague at the institute, Bill Dixon, now a senior lecturer with the department of criminology at Keele University in England. As with its predecessors, says Van der Spuy, "the book draws on a tradition of critical scholarship in criminology, and explores the challenges that crime in a transitional context poses, both for theoretical analysis and political strategy".

In terms of content, Justice Gained? represents long-standing research interests in the institute, and covers topics such as transitional justice, gangs and organised crime, youth justice, domestic violence, police and prison reform, and crime prevention. All but two of the writers have some association - former or current - with the institute.

And, as before, the contributors again question the notion of justice - thus the conspicuous question mark at the end of the title. But instead of throwing down the legal gauntlet as it did in Towards Justice?, the authors now take a critical tour of inspection through the criminal justice system, looking at the way in and degree to which justice - benchmarked against the aspirations of the earlier books - has in fact been achieved since the early 1990s.

"The question mark leaves the answer open-ended," says Van der Spuy. "We can't deny in all these areas that we address in the book, there have been monumental shifts in the governance of security - shifts in the legal frameworks, criminal justice policies, and operational practices. But there have also been difficulties, and many obstacles encountered along the way. In documenting local experiences in this regard, we hope that this book can make a contribution to our comparative understanding of criminal justice reform in high-crime transitional contexts."

The work is no apologia, however. At the book's recent launch at the law faculty, Professor Dirk van Zyl Smit, co-editor of the 1990 Towards Justice? and a contributor to the new text, made it clear that his chapter on overcrowding in prisons was one written "in anger". Understandably so, says Van der Spuy, given the deplorable conditions that continue to characterise life behind bars.

Justice Gained? is, perhaps more than Towards Justice?, a book in which the authors have engaged with the difficult intersection between grand policies of the post-1994 era and stubborn local realities, she adds.

It's an intersection that scholars will have to keep tabs on. "I think it's our duty," Van der Spuy says, "to keep on engaging with how the context continues to place constraints on policies."

It may be criminal not to.

Justice Gained? is published in South Africa by UCT Press and can be found at Juta outlets.