Thanks to Sanlam for contribution to business science 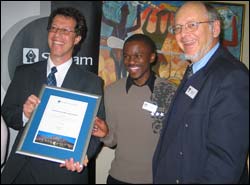 Speaking at the function, deputy dean of the commerce faculty, Professor John Simpson, pointed out that the programme was one of the School of Management Studies' greatest success stories.

He said the ECP's low exclusion rate was testimony to the success the programme enjoyed.

In the three years the programme has been running, only eight of the ECP's 215 students have been excluded for academic reasons.

Designed to attract and retain students whose school background has not adequately prepared them for the rigors of tertiary study and who want to pursue a career in the field of management, the programme provides extra time to gain foundation skills and an environment, which encourages skills development through a variety of additional activities, including collaborative learning workshops and extra tutorials.

SRC president Sicelo Mbambo, who is a product of the ECP, said he was privileged to be part of a group of such talented individuals.

"The SIM programme is of the utmost value to students and the university," said the fourth-year student. "It not only assists UCT in transforming the institution but is also an opportunity to right the inequalities of the past.

"It has produced well-rounded individuals who have grown in confidence and stature while on the programme and who contribute to the university by being involved in many activities."

"It's all very well having a good programme but its success depends on how well it is implemented. UCT has done very well in this regard."

He added that the ECP was essential as it was able to bridge talent, energy and creativity with a lack of opportunity.

"There is a good probability," he said, "that the future leaders of our country and business sector will come from these ranks of individuals."