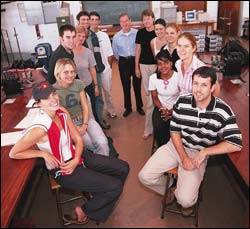 Sometime in 2002, physics postgraduate Mark Horner was unscrambling the head-scratching concepts of wave phenomena for a bunch of school pupils at a science festival. So taken were the learners with Horner's user-friendly explanations that they begged him to write it up for them.

He did much more than that. By 2003, Horner had recruited a band of volunteer science students, mostly classmates from UCT, to work with him on a project now known as the Free High School Science Texts (FHSST) initiative. The aim of the scheme is to compile three textbooks - one for each subject - for grade 10 to 12 physics, chemistry and maths.

The twist is that the UCT students and their helpers would expect and receive no royalties of any kind from the sale of the books. The only cost schools would have to be cover, in effect, would be printing. The students hope to hurdle, in part, even that obstacle by raising funds to print an initial stack of books. (The project has already made ground in that direction, and will be showcased to potential investors at an innovation bazaar to be hosted by the Shuttleworth Foundation, founded by UCT graduate Mark Shuttleworth.)

For those schools with access to computers and the Internet, the textbooks will also be available online where teachers and pupils can download them at no cost.

"A recent survey pointed out that there's a severe lack of resources in science education in South Africa," explains Spencer Wheaton, a PhD student in the physics department who runs the editorial part of the project while Horner (who still keeps an eye on administration) is based at Lawrence Berkeley National Laboratory in the United States as part of his UCT doctoral studies. "Not just in terms of qualified teachers, but also in terms of available books."

Which means that a set of up-to-date textbooks penned by those at the cutting edge of the subject may well be in high demand. The team hopes to have their first offering, the physics textbook, out by the end of the year - with the sanction of the Department of Education, of course. The book will cover all of the physics curricula from grades 10 to 12, and is designed to prepare students for the final grade 12 exams. "We've got all the checks in place to make sure that our content is consistent with the curriculum," says Wheaton.

In addition to the grade 12 learners, grade tens may also find the book handy, of course, as would tertiary students who need to go over some high school physics they may have forgotten or stumbled over.

And just because their textbook will be free doesn't mean it will be inferior, vows Wheaton. For one, a group of postgraduates - which includes some teachers - working with Associate Professor Kevin Rochford of the UCT School of Education is keeping a critical eye on the content. The book is also flush with worked examples and step-by-step strategies for tackling problems. "We want the book to be accessible, and clear enough to be understood, even by second-language English speakers.

In addition, chapters will be rounded off with essays written by professionals who will explain how they use science in their specific - and varied - vocations. "That will expose students to potential career opportunities that science can bring, and also show them that it's not just scientists who use science," notes Wheaton.

"We're aiming for a quality textbook that does something slightly different."

One hiccup for the project is that there is a slight physics-bias in the group at the moment. FHSST therefore needs students - keen, dynamic ones - who are willing to offer their time and knowledge, regardless of discipline, to the chemistry and maths textbooks. And anyone is welcome - scientists, humanities students who can lend a hand with the editing of the books, or even design students (like the one designing the cover of the physics text). "We're looking for anyone who feels they can make a contribution," says Wheaton.

The group is hoping for the same enthusiasm shown by the 35 or so people who, amid their other commitments, have been working on the physics handbook. And that group excludes the many who offer tips, ideas and comment via e-mail from all corners of the globe. "It's happened quite a lot that we had people contact us and say: 'What a great idea - I've wanted to do this a while back and have bits written up. Would you like it?'."

It's demanding work, says Wheaton, but also very satisfying. "As scientists, we're often asked to justify what we do, why the government should spend loads and loads of money on our research. This is just an obvious way of using our education to give something back to society."

More information on the project can be found at http://www.nongnu.org/fhsst, while Wheaton can be reached at wheaton@hostess.phy.uct.ac.za.