Turn-up for the rugby books 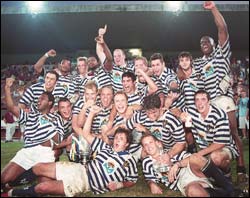 Skin of their teeth: The triumphant FNB UCT team celebrates its 26-20 victory over Maties.

The UCT FNB rugby first team is the new holder of the FNB Intervarsity Trophy, scraping to a 26-20 win over archrivals Maties on May 8. Not only did the victory mark the first time in 42 years that UCT eclipsed their celebrated rivals in Stellenbosch, but it also showcased the talents of several promising black players.

Even before the kick-off, the Intervarsity promised to be a spectacle. The celebs were up in the good seats, the pom-pom girls were bounding on the field, and the atmosphere - courtesy of a few thousand supporters - was electrifying.

And then, of course, there was the match, surely etched into the memories of players and crowd alike. And that, in turn, was followed by the post-match merrymaking that kicked off with underdogs UCT, inspirationally led by eighthman David Ricketts, being crowned the new holder of the FNB Intervarsity Trophy.

Professor John Simpson, head of the School of Management Studies and chair of the UCT Sports Council, was one of a throng of UCT supporters who trekked to the winelands to provide vocal and physical support. "I was really chuffed at the performance, not just because it was such a rewarding example of skill, commitment and guts, but more because it was the culmination of years of dedicated work by the UCT Rugby Club to get to the point where we would have sides on the field which were genuinely transformed."

He said that most sides representing UCT field substantial numbers of black players. "Indeed, 22% of all players in our teams are black, so the fact that we had five black players in the first team on Saturday - all chosen on merit - was very much in line with across-the-board progress."

A few years ago, adds Simpson, the UCT Rugby Club appeared to be going nowhere - there was no new silverware in the trophy cupboard, and few black students were taking the game up at the university. In response, the club presented the Sports Council with a five-year plan that had two major goals - success at all levels by sides that included increasing numbers of black players.

"Saturday's performance was, in many ways, symbolic of the strategy's success," said Simpson. "Also, interesting to me, is the fact that UCT Rugby Club's administration, coaching and support staff are for the most part, unpaid volunteers, unlike other universities, including Stellenbosch, where large salaries are common."

The victory - celebrated gamely for hours thereafter by UCT students who had made it to Stellenbosch for the clash - also marked the first time in 42 years that UCT had managed to beat Stellenbosch University in its own backyard. In addition, it was also the first time in 14 years - the match was then staged at Newlands - that UCT had taken top honours in the season's official Intervarsity clash. But while the side deserved the win, UCT so very nearly and oh so very literally let the title slip through its fingers. UCT never ceded the lead throughout the match, but was never comfortably clear of its rivals either. A penalty try, along with three penalties and a conversion by Myles Brown, saw them to a 16-10 lead at halftime. Although UCT spent much of that first half defending its own line, the side did, however, score on just about every raid into Stellenbosch territory, with Brown dutifully converting all-but-one of the penalties awarded to UCT.

Maties broke the UCT defence down once in the second half, a goal (26-20) bringing them to within six points. And they came heartbreakingly close to winning the game at the death. Firstly, Brown almost cast himself as the afternoon's villain when in the 42nd minute of the half and deep into his goal area, he let a pass slip through his hands and legs. The referee, thankfully, couldn't decide whose hand got to the loose ball first. Then, from the resulting scrum, the Maties shoved the UCT pack over the tryline, and in the mÃªlÃ©e a Stellenbosch player appeared to ground the ball. The referee - well-placed, we may add - ruled that the ball was held up, and blew the final whistle.

"It was more of a relief than a celebration," said Spencer King, UCT director of rugby and among those to die a thousand deaths on the sideline, of that final whistle. "The disappointment of having come so far and so close three years in a row would have been unbearable," he added, alluding to the draw and a last-minute two-point defeat of 2002 and 2003, respectively.

"What won us the game was our passion, our commitment, our defence, and our unwillingness to let the other side through. The players were up against it and they were tested to all degrees, and they had to dig deep to find some inner strength, which was wonderful."

The UCT fans also played their part, agreed King and Simpson. "It looked very much to me as if we outnumbered the Maties student supporters on their own turf," noted Simpson. "So, yes, it was a great victory in many ways and we are very proud of the rugby teams and the club."