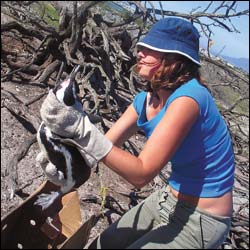 Hold firm: (Top) Getting the adults out of the nest and into the ventilated box is hard work. Sandra Bouwhuis visits each nest every five days to measure and weigh the chicks.

It has been an anxious week for custodians of the Cape's fragile coastal ecosystem. As salvors wrestled with the logistics of transferring 1 800 tons of bunker fuel from the listing Cape Africa, stranded with a 23m tear in its hull 200 kms west of Hout Bay, conservationists crossed fingers - and hoped.

Instructed to remain 120 sea miles off the coast, experts played down the threat of oil pollution. But the scenario seemed all too familiar. Sandra Bouwhuis, a Dutch master's student attached to the Avian Demography Unit and temporarily housed on Robben Island for a seven-month African penguin chick energetics project, remembers the Treasure spill in June 2000. Over 19 000 penguins were oiled, precipitating the biggest mass rescue of seabirds. June also marks the 10th anniversary of the Apollo spill and the ADU is working on a 10-year report follow up.

Beyond the nest where Bouwhuis is working today are the skeletons of two small wrecks, in addition to the flotsam and jetsam that litters the shore. One bird (Bouwhuis names him Mister Cool) has nested in the freezer compartment of a fridge that has washed up. And though natural predators like feral cats, mole snakes and kelp gulls may prey on chicks and eggs, the colony here, like Dassen Island, is recovering, closely monitored by teams of researchers. (Dassen and Robben Islands support the largest and third largest colonies of African penguins in South Africa.)

Gathering data, Bouwhuis has been especially busy at the nurseries. Here most egg-laying happens between February and June. The nest sites have all been mapped and she monitors 95 burrows; 45 with chicks and 50 with eggs. Bouwhuis returns to each nest every five days, rolling out her tools: notebook ("My bible"), two weighing instruments, a measure and two pairs of woollen gloves.

The heavy-duty mits serve as protection from the more aggressive parents, the birds who twist and turn their necks to show their eyeballs. "They want you to know they mean business," Bouwhuis warns. It is a challenge to be both firm and gentle. The chick is carefully lifted from the nest to be weighed and measured. It immediately burrows into her lap, tail up. "They're like ostriches. It thinks if it can't see me, I'm not there."

Scooping it in her hand, she eases it into a canvas bag, which is clipped to a hanging scale. "Thee hundred grams. You've grown." Afterwards, once the measurements have been recorded, she permits herself an indulgence, burying her nose in its minky fur. "They smell so beautiful." And they do, despite their diet of regurgitated anchovy.

"Now that's not nice," she admonishes. Her trousers are soon streaked with guano. The smell of it is strong on this side of the island, out of sight of the tourist buses, beyond the reach of zoom lenses, and tourist feet in socks and sandals. Nesting penguin pairs have taken over the old buildings and the rust-marked blockhouses.

"A penguin chick can double its weight in five days," Bouwhuis explains, extracting the first of two chicks from nest 31. The smaller is 171g; newly hatched, it weighed 60g the week before. At nine days old, the sibling is hefty by comparison: 370g.

In nest 35 the parent is extremely aggressive. This one needs two pairs of gloves. "You need to grow," she pronounces after weighing the smaller of its two chicks, just two days old. "You need to fight for your food."

Food is why she is here. Bouwhuis is measuring their energy usage. She will inject a tiny amount of doubly labelled water (harmless!) into 15 chicks of varying sizes. After an hour the injected water has spread through the body, and she takes an initial blood sample to determine how much of the isotopes of oxygen and hydrogen are in the blood.

From the two tiny blood samples, the amount of carbon dioxide the chick breathed out in two days is determined and converted into energy used. She will construct an energy budget to determine what it costs a parent to raise its young. How much fish do the parents need to catch? What is the peak demand for fish? All this information is valuable for developing conservation action plans for penguins.

Bouwhuis fell in love with birds as an undergraduate in Amsterdam. Having decided she wanted to work "out there", she found a home at Groningen University, where she was chosen as one of the faculty of mathematics and natural sciences' Top Master's students.

This is a two-year postgraduate programme linked to the faculty's top research groups and recruits the "brightest and most ambitious" students from all over the world. She is part of the evolutionary biology subset studying under Professor Henk Visser (Centre for Isotope Research and the Zoological Laboratory), with whom the ADU has several collaborations. At UCT ADU director Professor Les Underhill is Bouwhuis's co-supervisor.

Life as a fieldworker suits her. "This is so good," she says, surveying the island. "I love it. Everything, even the university is beautiful."

Though she returns to Holland in September, she hopes to come back later. "Ultimately, I'd like to do my PhD here."

Visiting the colonies at Robben Island, one is bound to bump into some very important penguins - like Peter. It was during a recent fieldtrip that Peter was spotted. Bouwhuis ran back to the house to fetch her camera. In true paparazzi style, she stalked the bird, crawling along the shore and into the water until she was 2m from the celeb.

Two days later her pictures were splashed across the world.