UCT on and off the boil 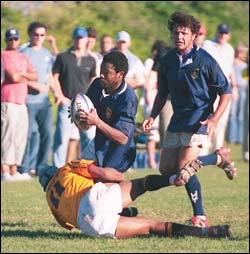 Nowhere to go: UCT's Khaya Sonstele gets the ball and a Victorians player around his ankles in the side's 19-24 defeat last week.

The UCT FNB rugby first side will have mixed feelings about their past two games, slogging away for a hard-won victory over Pniel Villagers on Saturday, April 24, before succumbing to a rampant Victorians on Freedom Day, April 27.

After a eleventh-hour victory over Bellville Tech the weekend before, things were looking up for UCT after beating Pniel Villagers 20-10 in its first home game of the season, even if "home" was a mudbath. In a game marred by handling errors - put that down to a slippery ball - the Ikeys showed that it is a young team with plenty of potential, say club administrators.

Things came unstuck in the side's home clash against Victorians, however. After taking an early 14-0 lead, UCT had to fight tooth and nail to hang on to a shaky 14-7 halftime advantage.

But Vics piled on the pressure after the break, and put the game beyond the UCT reach when it ran in four quick tries midway through the second half. The final result of 19-42 may have been a blessing in disguise, say UCT administrators, signalling that the side still has some work to do before the crunch game against Maties on May 8.