Two out of three for UCT 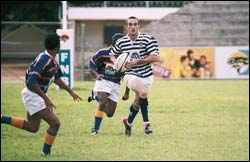 On the run: Garth Fowler heads for the first of his two tries in UCT's 44-3 win over Wits University.

The FNB UCT rugby team came away from the annual SASSU games with a bag of mixed but ultimately satisfying results, racking up all of 15 tries over the championship.

The side - made up of full-time students all aged 24 and younger - won two out of its three matches at the event, hosted by the University of Stellenbosch over the week of April 5 to 10.

UCT stumbled in its fixture against the University of Potchefstroom two days later, however, the side going down 10-38 to the Pukke (who would go on to become the event's only unbeaten side). Ferguson and Mpho Mbiyozo each scored a try for UCT.

The team bounced back well from this defeat to beat Port Elizabeth Technikon in its final game, running out comfortable 29-9 winners. Gregg Giles (two), James Martin (two) and Mike Miller accounted for the UCT tries.

This year, the SASSU games also doubled as the qualifying event for a FNB Super Eight knockout tournament to be hosted by the University of Pretoria in July. The top eight sides from the SASSU event - a ranking based on a range of criteria, including results (of course) - will then battle it out for this title. UCT's two victories should stand in it good stead when the qualifiers are announced in early May.