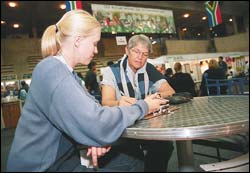 UCT sports scientists have taken a keen interest in the Two Oceans Marathon over the past 30 years, routinely casting their inquisitive eyes over athletes and the race itself.

The thousands of runners that take part in the event each year have served as rich source material for a host of studies by the MRC/UCT Research Unit for Exercise Science and Sports Medicine (ESSM) (and its UCT predecessors) for the three decades. "Two Oceans is the most studied race in the world, having generated no less than a score of scientific journal publications from studies over this period of time," said UCT's Tim Noakes, Discovery Health professor of exercise science and sports medicine. "Whilst the earlier studies in the '70s were very rudimentary, techniques have now become very specialised, allowing elaborate research to take place."

This year, just as ESSM formalised its relationship with the race, honour's student Janine Hugo launched a spin-off project to one of the earlier studies alluded to by Noakes - specifically one on menstrual dysfunction among elite women athletes. That contentious study - one of the earliest done on women athletes - found that menstrual dysfunction (irregular menstruation) among these runners was not merely the result of heavy training regimes, as many scientists were contesting at the time, but that it was also tied to past or current disordered eating patterns. These disordered eating patterns, explained Hugo's supervisor, Lisa Micklesfield, need not necessarily be diagnosed conditions such as bulimia and anorexia, but could be something as simple as a low-calorie intake that may not meet the body's demands.

While previous research had concentrated solely on elite athletes, Hugo and Micklesfield are including recreational runners in their new project. They will be investigating the incidence of menstrual dysfunction and disordered eating patterns in female ultra-marathon runners compared to those competing in the half-marathon. They will also see if there are any ethnic differences associated with these conditions.

During this year's Two Oceans registration, Hugo, Micklesfield and a band of other ESSM students signed up as many of the event's about 5 300 women runners as they could for the study. They then took volunteers through a spot questionnaire that covered topics such as training routines (how often and how long), the women's perceptions of their bodies, and menstrual history. Contrary to her fears - that only a scattering would be interested or keen to talk about, at times, very personal subjects - Hugo found that women were very willing to take part in the study, and very forthcoming with information. "I must say, the women have been very responsive and very helpful," she noted.

Follow-up interviews, to be conducted a month or so after the race, will tackle the same issues, only in much more detail, says Hugo. In addition, this second round of questions will also look at the link between disordered eating patterns and bone mineral density, another project to be run by Micklesfield, whose recently-completed PhD was on physical activity and bone health through the various life stages.