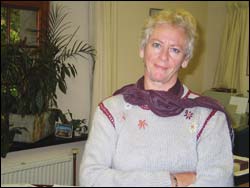 Professor Jenny Day, head of the zoology department, has won the senior researcher category (over 35) in the third Woman in Water Awards, presented by the Department of Water Affairs and Forestry and sponsored by Eskom. She is in good company - colleague Dr Jackie King won the same award last year.

The awards formed part of the National Water Week, celebrated from March 22 to 28. Day was one of six women honoured in this round. The associate professor is one of the co-founders of UCT's renowned Freshwater Research Unit (FRU), having established the entity with King and fellow fresh-water ecologist, Professor Bryan Davies in 1984.

Speaking at the ceremony in Pretoria, Minister Ronnie Kasrils said the honours had been presented to women who had excelled in their field and who had made a significant contribution to water management in South Africa.

"In particular, the women who have been chosen have used their knowledge, their skills and their considerable capacity to ensure that water management in South Africa contributes to a better life for all," he added.

However, Kasrils stressed the need for a progressive approach of transformation in certain sectors where water was concerned, in particular in the engineering and scientific fields, with special emphasis on creating opportunities for women from disadvantaged backgrounds.

Widely viewed as a leader in her field, Day was commended for her life's work in water research and conservation. The citation read: "She has contributed to numerous scientific publications, received invitations to foreign universities and research centres, and overseen more than 15 major projects in the water field."

As well as her contribution to the FRU, Day was also lauded for the book she co-authored with Davies, Vanishing Waters, regarded as a standard textbook for freshwater ecology courses at tertiary institutions.

Day believes the award also recognises the value of her teaching and research within the SADEC region, where she is training a valuable cohort of postgraduate students to build capacity in the vital area of integrated water management on the sub-continent, where water is a prized commodity. Day obtained her PhD from UCT in 1978 in systematics and the description of groups of marine shrimps. But she has been "involved in freshwater things" for 25 years.

Juggling motherhood and work since she was made a permanent member of staff in the 1970s, she counts herself fortunate to have had both family and career. "Though what I probably needed was a wife, not a husband," she said wryly.

As a fundamental ecologist, Day's interests lie in ephemeral water sources like ponds and lakes. "Many of these inland sources are dry most of the time and the organisms that live in these water bodies can survive desiccation, mostly in the egg. If you can imagine a simple ecological system, that's it."

In the Western Cape, many of these ephemeral systems are polluted or have been dammed, especially across the Cape Flats. "The authorities have also built over many of them and the result has been a huge loss in biodiversity," she added.

Water conservation is an area to which women seem drawn. Day agrees. "Perhaps it's the nurturing way they think about things. It's also hands-on requiring a lot of work within various communities." The FRU, for instance, has been formed almost entirely of women since its inception. Through this, there has been a chain of good role models.

It is no coincidence that much of the FRU's research found its way into the new national Water Act of 1998, implemented by former water affairs minister Kader Asmal, and hailed as arguably the most advanced water law in the world, firmly controlling the quality component of all aquatic ecosystems used by humans for the abstraction and preservation of water.