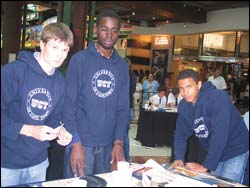 The 30 teams (each made up of three members) were provided with a few wooden sticks, glue and rope, and had to assemble their bridges in about five hours using these bare essentials.

According to civil engineering senior lecturer Marianne Vanderschuren, in order to determine the winner, the failure load is divided by the mass of the bridge. An aesthetic value (out of 30 points) is determined by inspection and added to this.

"Although the Higher Technical School Drostdy (Worcester) constructed a bridge which could hold 335 kilograms, the Bellville team's bridge was lighter and they scraped home with an impressive win." Both teams will be sent by SAICE to represent the Western Cape in an international final to be held in Gauteng later this year.