Science in the eye of the beholder 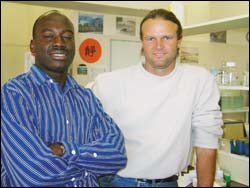 Winning the Science in Action category as well as the overall prize in the SA Science Lens photographic competition, PhD student Anton Pauw of Simonstown captured an image of the Brocken Spectre at the top of Kogelberg Peak, haloed by a glory.

"The phenomenon can be seen anywhere in the world when the right combinations of clouds, light and topography allow bright sunshine to project the observer's shadow through the cloud," Pauw explained.

But being at the right place at the right time got him the shot that stood out among the contenders for top honours.

The apparition takes it name from a phenomenon that appeared atop the Brocken, the highest peak in Germany's Harz mountains, which years ago terrified locals before a scientific explanation was presented.

Those who saw the "spectre" on the Brocken reported it as a ghostly figure that seemed to tower from the mist, sheathed in shimmering rays. The phenomenon occurs when a low sun rises behind a climber or walker looking down from a ridge or peak into the mist. The glow and rings are a glory, centred directly opposite the sun at the antisolar point. The ghostly apparition is no more than the climber's shadow projected forward through the mist.

Though there was no winner in the biotechnology category, Dr Edward Nyatia and Dr Dirk Lang's study of a mammalian astrocyte cell was highly commended by the judges. In their image flotillin protein (red grains) is shown being expressed by an astrocyte cell in culture (green) from a mammalian central nervous system. The position of the nucleus is shown in blue.

With a PhD from Germany in developmental neuroscience and the molecular aspects of central nervous system repair, Lang came to UCT in 2000, responding to a job advertisement for a permanent senior lecturer post. Since arriving, he has set up a digital fluorescent microscope, one of the very few such facilities available anywhere in South Africa.

"I try to discover which molecules make cells regenerate and what prevents this from happening, causing an incomplete repair process in the central nervous system."

Putting their heads together, Lang and his Ugandan doctoral student selected their visual from a range of images taken for their work.

A veterinary medicine graduate from Makerere University and with a Master of Science degree in neuroanatomy from Edinburgh University, Nyatia arrived at UCT in 2001 to begin his PhD.

"We looked for the most appealing picture taken during our research on astrocyte cells - using the equipment we have makes this easy to do," Lang added. Last year he won third prize in the same photographic competition.

Both Lang and Nyatia are keen photographers and see this aspect of their science adding a new dimension to its understanding.

"We realise that imaging is becoming an important aspect of science communication."