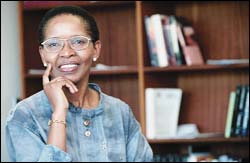 The gift of forgiveness: Assoc Prof Pumla Gobodo-Madikizela recently ran a retreat on forgiveness for members of the US House of Representatives.

Worlds apart or not, members of the US Congress believe they have plenty to learn about forgiveness from South Africa - and, in particular, one UCT scholar and writer.

Associate Professor Pumla Gobodo-Madikizela found herself something of a literary celebrity in the US last year when her book, A Human Being Died That Night, made its world debut there. In the volume, Gobodo-Madikizela recounts her interviews with Eugene de Kock - the former commander of the infamous apartheid hit squads that operated from Vlakplaas in Gauteng - at C-Max, the maximum security section of Pretoria's central prison.

The book then tackles the issues of evil and forgiveness.

A Human Being Died That Night received enthusiastic reviews in the US - as it did in South Africa and Holland later - and touched a nerve in that country. When members of the US House of Representatives, part of the American Congress, visited South Africa under the aegis of the Faith and Politics Institute in September, they called on Gobodo-Madikizela to speak to them about the book - they all had copies - at the plush Table View Hotel on the Waterfront.

Soon thereafter, the institute - A Washington-based, multi-religious centre that offers spiritual and ethical support to Capitol Hill - also invited her to run a weekend programme on forgiveness for Democrats and Republicans on the House of Representatives. Over three days at the end of January, Gobodo-Madikizela led discussion on the human response to trauma and loss, healing, and the gift of forgiveness, among other things, at the scenic La Casa de Maria retreat in Santa Barbara, California.

The experience was an eye-opener for her.

"It was just so striking to me that, there I was in the US, engaged in a process of dialogue with members of the American government who were interested in the process of forgiveness as witnessed in South Africa," says Gobodo-Madikizela. "That was amazing for me, particularly because there were both Democrats and Republicans there - we never think of the two sides meeting, but there they were, in dialogue for a whole weekend."

The group made eager students, she reports.

"They were all genuinely interested in wanting to learn where we had been in South Africa, and how we got our dialogue together. What was pleasing for me to see as a South African is that our model of dialogue is held in high esteem, to the extent that leaders at that level are willing and able to explore the possibilities of adopting it."

Soon after arriving back in South Africa, Gobodo-Madikizela also learned - if she hadn't realised it before - that her own work is held in equal esteem back in the US. She received notice from her publicist that A Human Being Died That Night had been crowned with a Christopher Award in New York, presented each year to works in radio, television, film and publishing that "affirm the highest value of the human spirit".

Some 847 books published in 2003 for adults and young people were submitted for consideration. In the books for adults category, the seven winning titles explore, respectively, the inspiration gleaned by a paediatric neurosurgeon from his young patients (If I Get to Five); the healing power of forgiveness (A Human Being Died That Night); the legacy of four literary masters (The Life You Save May Be Your Own); the human face behind a senseless NYC killing (My Heart Will Cross This Ocean: My Story, My Son, Amadou); the determination of a young, blind woman to found a school for blind children (My Path Leads to Tibet); a landmark fire that exposed Dickensian labour practices (Triangle: The Fire That Changed America); and the contributions of women in service to God (Sisters: Catholic Nuns and the Making of America).