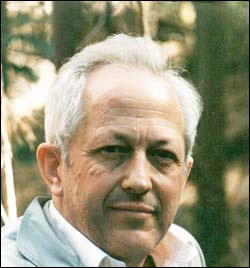 Templeton Prize: Distinguished Professor of Complex Systems, George Ellis (department of mathematics and applied mathematics): "delighted that this work has been assessed by the judges as a useful contribution".

Science and religion, like politics and religion, are seldom good bedfellows. But over the past 15 years UCT's Professor George Ellis has produced a compelling body of work on the fundamentally complementary nature of science and religion, earning him this year's Templeton Prize, the world's largest annual monetary award to an individual - a purse of roughly R10-million.

Though news was announced in New York last Wednesday, Ellis will receive the award (which goes by the full name of the Templeton Prize for Progress Toward Research or Discoveries About Spiritual Realities) from the Duke of Edinburgh in a private ceremony at Buckingham Palace on May 5.

Counted among a handful of the worlds' leading relativistic cosmologists, including luminaries such as Stephen Hawking and Malcolm MacCullum, as well as a strident social activist, Ellis said mankind stood at an important threshold.

"We are at a stage in human history when, as we gaze with amazement and appreciation at the incredible progress of science in the last century, we can also start to see clearly some of the limits to what science can achieve," he said in a statement.

"The way in which science and religion by and large complement each other is becoming ever clearer, as are the natures of the various points of tension between them, and some possible resolutions of those tensions. It is a good time to look at these issues."

Having grown up steeped in Anglican youth activities, the graduate from UCT and PhD (1964) from Cambridge became a Quaker in 1974. In his religion and science writings, he calls for a balance between the rationality of evidence-based science with faith and hope.

His views have been shaped partly by his experiences in South Africa after the country emerged from apartheid to racial democracy without capitulating to racial war. Ellis describes that history as a "confounding of the calculus of reality, beyond the explanation of hard science, including issues such as ethics, aesthetics, metaphysics and meaning".

In his nomination, Reverend Dr William R Stoeger, an astrophysicist with the Vatican Observatory Research Group, noted that Ellis's service to a broad spectrum of social, economic and ethnic groups in South Africa and elsewhere had sparked "significant" insights into the workings of the physical universe.

"He has demonstrated how genuine religious and theological perspectives can help us understand the constitution and character of our universe in terms of 'kenosis', self-sacrificing love," he wrote, adding that Ellis had shown "that our universe seems to be particularly suited for fostering that attitude and practice, and to require it for its harmonious functioning at every level".

Self-sacrificing love, Ellis believes, is the true nature of morality, another area that cannot be explained by physics. "Ethics is causally effective and provides the highest levels of values that set human goals and choices." Describing himself as a "moral realist" the academic said he believed ethics and morality constituted a very real part of the universe and were not something humans had socially developed over the millennia.

"I believe that we discover the true nature of ethics rather than invent it."

Ellis has enjoyed an NRF A1-rating since 1984 and, with years of academic pursuit and research on the clock, his formal sojourn here is soon to end. Though he retires later this year, fortune has smiled on him. The substantial Templeton Prize will underwrite continued study.

Sir John Templeton, the visionary financier who pioneered global investment strategies, founded the award after selling his group of mutual funds in 1992. Since then he has fostered progress through philanthropy, fomenting a broader understanding of the relationship between theology and science.

Setting up the prize in 1972, Templeton specified that its capital value always exceed the Nobel Prizes to underscore his belief that advances in spiritual discoveries can be quantifiably more significant than those honoured by the Nobels.

As the 34th Templeton laureate, Ellis is in esteemed company; the prize was first awarded to Mother Theresa in 1973, some six years before she was honoured by the Nobel committee for her work in the slums of Calcutta. Latterly, the winners have been philosopher Holmes Royston III (2003), the "father of environmental ethics", and John Polkinghorne, a mathematical physicist and Anglican priest (2002).

In self-sacrificial fashion, Ellis intends following Templeton in trying for "maximal strategic advantage". He plans to split the money in two portions. Half will go to a trust fund, the interest of which will support him in retirement and in his remaining life's work. On his death, this capital will go towards a major project at UCT, an institution he generously describes as "one of the great educational beacons in Africa".

"A further strategic aspect of this donation will be that I will use it to try to help leverage a greater willingness of alumni of my university to support their alma mater - a tradition that is strong in the USA but weak in South Africa," Ellis continued.

The other half will be used to support a varied set of projects and substantial grants (about R1-m each) will go to: The Basic Income Grant Campaign, The Association for Educational Transformation (ASSET), and Quaker organisations in South Africa.

The largesse will be spread among smaller communities too, the pockets he believes are doing sterling work in developmental terms: Michael Oak Waldorf school in Kenilworth; the Cape Town Life Training Centre of the Kairos Foundation, who run transformatory life training courses; the African Summer Theory Institute, an annual theory school for African physics and science students; a computer laboratory for an agricultural school near Viljoenskroon; and the Hurdy Gurdy House, a home for autistic children near Cape Town.

"By spreading the prize money in this way, I believe I will achieve excellent advantage in developmental terms. It is a delight to be able to assist wonderful people who are doing so much for others."

On the future discourse on science and religion he commented: "Through sound vision and careful strategic use of resources, the Templeton Foundation has facilitated development of this important topic as a recognised academic subject in many universities and colleges. It has enabled development of science and religion courses, local societies, conferences and other initiatives that have profoundly supported both the widening and deepening of the debate. Whatever our religious or philosophical persuasion, we should all be grateful for that intervention."

(On pg 4 is Ellis's abridged statement from the news conference.)