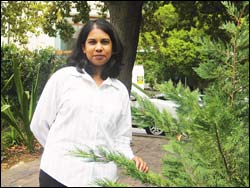 It was an armed robbery at her quiet Pretoria home that set research and innovation's Christina Pather's sights on a new life and job in Cape Town (after she and her husband had deliberated over New Zealand). The Jacaranda City's loss was UCT's gain.

Ensconced in her office opposite the ballet school, Pather is wrestling with the detail of her new post (manager, research information), but relishing the fact that she has had a busy start to her new career. This entails looking after UCT's rated researchers and their outputs and nursing along those who have the potential to make the NRF listings.

Those who attended the recent NRF gathering at the Smuts dining hall will remember DVC Professor Cheryl de la Rey's impromptu introduction of Pather as she was "sitting quietly in the back row".

Pather is both new to UCT and to Cape Town, having grown up in Verulam and attending the University of Durban Westville. She graduated with a BCom (honours) in industrial psychology. She moved to Pretoria in 1997 to work at the HSRC (CSD division) as a data archivist, during which time she signed up for a part-time master's degree.

Though it was a formidable challenge for the young woman, Pather had already reconciled herself to the ordained trek. "I had realised the job opportunities would be up north."

Two years later the CSD merged with the FRD to form the NRF. By 2001 she had moved to a new position as a professional officer, NRF lingo, she says, for a role in the rating process and the on-line submissions system.

She found the country's scholarly coterie a fascinating group, even those who had retired but still belonged to various research committees.

But it was the armed hold-up at her home that provided an unwelcome "wake-up call".

"I saw how fragile and important life is."

After she and husband Kalay had settled the emigration question, she was spurred to embark on her PhD in organisational behaviour through Stellenbosch University. It was then that the post at UCT caught her eye.

In the research and innovation department she has three main responsibilities: marketing the various research portfolios and co-ordinating the publication of the annual research report; overseeing the information management section, particularly IRMA (Integrated Research Management Applications, the new software system, which is currently being rolled out that will gather and manage information on the research community's publications); and managing the NRF ratings processes. Pather believes one of her main challenges will be to encourage researchers to make use of the IRMA system.

The UCT post has separated her temporarily from her family as Kalay manoeuvres his career - entailing either a transfer or a new job.

In the interim, they are running up some hefty call charges ("fortunately he's with Telkom and gets a rebate"). But Pather's hoping things will have been resolved by June. Equally important to her is the anticipated reunion with Oscar, the family cat, who, with feline sagacity, went off his food after she migrated south.

Content with her new life and the stimulation of a new career, even the notoriously schizophrenic local climate has played along.

"The weather has been perfect," Pather beams. "but the traffic – it's so congested!"