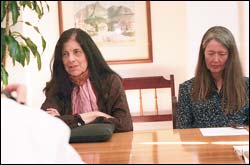 This is an excerpt from American writer Susan Sontag's inaugural Nadine Gordimer Lecture, delivered first at Wits and then again at UCT last Wednesday night. Her visit here elicited a flurry of media interest.

There is an essential - as I see it - distinction between stories, on the one hand, which have as their goal an end, completeness, closure and, on the other hand, information, which is always, by definition, partial, incomplete, fragmentary.

This parallels the contrasting narrative models proposed by literature and television. Literature tells stories. Television gives information. Literature involves. It is the re-creation of human solidarity. Television (with its illusion of immediacy) distances - immures us in our own indifference.

The so-called stories we are told on television satisfy our appetitie for anecdote, and offer us cancelling models of understanding. (This is the practice of punctuating television narratives by advertising.)

They implicitly affirm the idea that all information is potentially relevant (or "interesting"), that all stories are endless - or if they do stop, it is not because they have come to an end, but rather that they have been upstaged by a fresher or more lurid or eccentric story.

By presenting us with a limitless number of non-stopped stories, the narratives which the media relate - the consumption of which has so dramatically cut into the time the educated public once devoted to reading - offer a lesson in amorality and detachment that is antithetical to the one embodied by the enterprise of the novel.

In story-telling as practised by the novelist, there is always - as I have argued - an ethical component. This ethical component is not the truth, as opposed to the falsity of the chronicle. It is the model of completeness, of felt intensity, of enlightenment supplied by the story, and its resolution - which is the opposite of the model of obtuseness, of non-understanding, of passive dismay, and the consequent numbing of feeling, offered by our media-disseminated glut of unending stories.

Television gives us, in an extremely debased and untruthful form, a truth that the novelist is obliged to suppress in the interest of the ethical model of understanding peculiar to the enterprise of fiction: namely, that the characteristic feature of our universe is that many things are happening at the same time. ("Time is so it doesn't all happen at once – space is so it doesn't all happen to you.")

To tell a story is to say: this is the important story. It is to reduce the spread and simultaneity of everything to something linear, a path. To be a moral human being is to pay, be obliged to pay, certain kinds of attention.

It is to order the overwhelming spread and simultaneity of everything, at the price of ignoring or turning our backs on most of what is happening in the world.

The nature of moral judgements depends on our capacity for paying attention - a capacity which, inevitably, has its limits, but whose limits can be stretched.

Traditionally, all cultures are local. Culture implies barriers (for example, linguistic), distance, non-translatability. Whereas, what "the modern" means is, above all, the abolition of barriers, of distance; instant access; the leveling of culture - and, by its own inexorable logic, the abolition, or revocation of culture.

This pull toward homogenisation cannot fail to affect the project of literature.

The novel, which is marked by singularity, can only enter this system of maximum diffusion through the agency of translation, which, however necessary, entails a built-in distortion of what the novel is at the deepest level - which is not the communication of information, or even the telling of engaging stories, but the perpetuation of the project of literature itself, with its invitation to develop the kind of inwardness that resists the modern societies.

To translate is to pass something across borders. But, more and more, the lessons of this society, a society that is "modern" are that there are no borders - which means, of course, no more or less than: no borders for the privileged sectors of society, who are more mobile geographically than ever before in human history.

And the lesson of the hegemony of the mass media - television, MTV, the Internet - is that there is only one culture, that what lies beyond borders everywhere is - or one day will be - just more of the same, with everyone on the planet feeding at the same trough of standardised entertainments and fantasies of eros and violence manufactured in the United States, Japan, wherever; with everyone enlightened by the same open-ended flow of bits of unfiltered (if, a fact, often censored) information and opinion.

The transnational culture into which everyone who belongs to the capitalist consumer society - also known as the global economy - is being inducted is one that in effect makes literature irrelevant, a mere utility for bringing us what we already know, and can slot into the open-ended frameworks for the acquisition of information, and voyeuristic viewing at a distance. Every novelist hopes to reach the widest possible audience, to pass as many borders as possible. But it is the novelist's job, I think, and I believe Nadine Gordimer agrees with me - it the novelist's job to keep in mind the spurious cultural geography which is being installed at the beginning of the 21st century.

On the one hand, we have, through translation and through recycling in the media, the possibility of a greater and greater diffusion of our work. Space, as it were, is being vanquished.

Here and there, we are told, are in constant contact with each other... are converging, mightily. On the other hand, the ideology behind these unprecedented opportunities for diffusion, for translation - the ideology now dominant in what passes for culture in modern societies - is designed to render obsolete the novelist's prophetic and critical, even subversive task – and that is to deepen, and, sometimes, as needed, to oppose the common understandings of our fate.