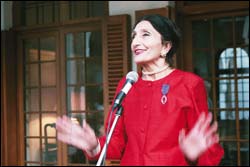 Of the highest order: Assoc Prof Anny Wynchank has been inducted into the French Order of the Palmes AcadÃ©miques.

France has inducted UCT's Associate Professor Anny Wynchank into its order of the Palmes AcadÃ©miques, one of the country's illustrious Orders of Merit.

The French ambassador, Jean Felix-Paganon, presented the order's official medallion to Wynchank at a recent reception at his residence in Newlands. The award was made in recognition of Wynchank's work to forge closer ties between South Africa and francophone Africa via the French government.

Born in Morocco and a graduate of the University of Bordeaux in France, and, after studying at Oxford in the UK and Columbia in the US, Wynchank arrived in South Africa with her husband, Dr Sinclair Wynchank, in 1972. She completed her doctoral studies at UCT and started lecturing here in 1975.

Although her previous research had concentrated on comparative literature, UCT had no such programme running at the time, and so Wynchank taught instead, for the first few years, French literature of the last few centuries. Until 1981, that is, when - thanks to the support of her then dean, Professor Mitchell Shackleton - she pioneered courses in African literature and studies, paying particular attention to francophone West Africa. This was at a time when there was very little interest in such fields, noted Wynchank. Her students, however, "lapped it up and were groundbreakers in many ways", she said.

"We were talking about issues that were pertinent in the eighties. My students, even then, knew Haiti was the first black republic in the world. They knew that because of literature."

In 1994, Wynchank also introduced studies on black cinema from the Francophone regions. Back then, however, these films were only available in unwieldy 35mm format, and only in France. Which meant that Wynchank had to pick up the bulky containers from the French embassy, and then lug them to her car and from there to wherever it was screened.

There were rewards, though, such as an invitation to Burkina Faso for the 1999 Festival Panafricain du CinÃ©ma de Ouagadougou (FESPACO), the largest black film festival in the world, and an appointment as jury member to the M-Net All Africa Film Awards. Wynchank even got Djibril Diop MambÃ©ty, the director of African classics like Little Girl Who Sold the Sun, Hyenas and Touki Bouki, to speak to her classes at UCT. Later, she also wrote a book on the late Senegalese filmmaker.

Now retired, the "cycling professor" - she still steadfastly pushes her way up the hill every day on her trusty bicycle - serves as senior research associate in the French studies section. Her quarters are smaller these days and she receives no salary from UCT, but this is a small price to pay for the privilege to teach, write, do research and - when funding can be found - wing her way to conferences, such as a recent one in Paris.

"What is nice is that I can now do what I enjoy and like," she said. "And even if I'm not paid, it's what I would choose to do."