Actress has the world at her feet 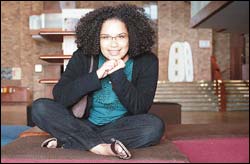 Star dust: Quanita Adams has received rave reviews and a Fleur du Cap award for her work in At Her Feet.

If At her Feet, the Fleur du Cap-winning one-person play by young playwright-director Nadia Davids, is about modern Muslim women torn between two worlds, getting Quanita Adams to bring the characters to life would seem to be dream casting.

Smart, witty and lyrical, At Her Feet (the title derives from the Muslim maxim that "paradise lies at the feet of your mother") tells the story of half-a-dozen or so Muslim women - and one guy - either at odds with their faith or at odds with the world because of their faith. The dramatis personae include a Jordanian woman stoned to death because she spoke to a man who was not her father/brother/uncle/cousin and whose story bookends and drives the play; a quasi-Marxist-black-consciousness hip-hopper with issues; a snooty, svelte WASP type who, post 9/11, is instructed to remove her scarf at her travel-agency work; as well as an elderly woman who mournfully recalls how she was not allowed to bury her mother.

The women live in a postmodern world of MTV and honour killings, Jenni Button outfits and head-to-toe religious dress ("ninja at ten o'clock"). But all, in unique ways, are clinging to their beliefs.

In enacting all these stories, Adams, a UCT drama graduate, has plenty to bring to this party. Take her unconventional upbringing, for example. Her parents, devout Muslims, decided that they wanted their daughter to get the best education possible and posted her to Catholic schools - St Augustine's Primary and Springfield Convent Senior School.

Adams lived Catholic school life to the full - she even performed as a soloist in the school choir - but there was never, she says, a clash with the dictums of her own faith. "Even though the schooling was very Catholic, by the same token we were taught tolerance and acceptance, which are also principal values that my parents taught me."

At home, she still had to go to Muslim school, wear her scarf when the occasion called, and was reminded that everything she did in life had to come "from a place of spirituality", she says. "My parents taught me to place myself in context and relation with my God and my faith."

Adams finds it easy to relate to some of the characters for other reasons as well. Her own bushy mane, for instance, means she has much in common with the loud and proud hip-hopper who has her heart broken because her boyfriend refuses to let her meet his parents because of her "kroes" (curly) hair. In turn, Aunty Kariema is based, the actor confides, on a procession of aunts and neighbours.

Which doesn't mean that there isn't still some hard acting to be done. The straight-haired WASP, for one, was not one of her favourite characters, and demanded effort. "Because I'm not those women, it was very difficult for me to like her initially. I was like, why [with a gnashing of teeth for emphasis] are we doing this woman? I can't stand her."

Davids' advice to her star was to not judge the character. "If you judge as a character, you as an actor step in," says Adams. "And I think when you take on characters, the goal for the actor is to be so far away that the audience sees only the character."

The pair has evidently done a good job at getting audiences to see the characters - although the play is ostensibly about Muslim women, it has had resonance for a much wider audience. Jewish matrons, gay Afrikaner boys spoiling to kick down the doors to their closets, African-Americans with yam-baking aunts and even a prominent Cape Town imam have all come up to the director and actor, sometimes with tears in their eyes, to laud them.

Understandable then that Adams has such high aspirations and hopes for At Her Feet. "It must run forever," she said.

"I see no reason why it can't be a Cats or a Les MisÃ©rables or, closer to home, a Barney Simon-Athol Fugard production or a Gibson Kente play.

"This can be the next great South African play."

Last week alumni from UCT's School of Education attended a special performance of At Her Feet at the Baxter. The play will run there until April 10.