175 years on ... changing minds and histories 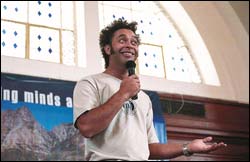 "When friends are dark, days are few – " - Comedian Kurt Schoonraad in full flow.

The stately Jameson Hall has probably seen more sedate functions in the university's 175 years. But the hall full of staff who had filtered in from their offices and laboratories for the launch of the official celebratory programme last Wednesday revelled in every beat from Dizu Plaatjies and his rambunctious troupe of dancers and musicians.

And comedian Kurt Schoonraad had some wiping their eyes as he rampaged and pillaged his way through South Africa's best-loved stereotypes (the traffic cop, "Is you the driver of this verihihicle?", the Obs intellectuals and the vagrant in debate about exactly where UCT is right now ("Nay, it's up the road, just there."), the Ferrari pit team from Mitchell's Plain who change the tyres, tint Schumacher's back window and bum a cigarette before the McLaren team can say "Benevenuto!").

Staffers from the Department of Communications and Development were among the throng, modelling the promotional 175 T-shirts (on sale for R69.95 at Brain Books, UCT's bookstore.The lapel pins are also on sale there at R13.95). Afterwards, commemorative chocolates bearing the 175 crest were handed out.

Not to be outdone, the student function last Thursday featured alumnus and comedian Marc Lottering who arrived at the Jammie Plaza on a RAG float built by Tugwell residents. The irrepressible Lottering confessed he was glad he did not have to drive the truck.

"My driving hasn't been too good lately," he quipped, referring to a recent charge of drink driving. But the press had it all wrong, he said.

"The three cars rushed out at me. It's a plot against me. My white neighbours know I like karaoke and I come home late at night –

"But things have changed," he told the students massed on the Jammie Steps and beyond. "Now we have a black SRC president and vice chancellor.

"If you had told me years ago I'd arrive at UCT on the back of a burning truck among crowds, I would have thought Caspirs and tear gas. It's not often a boy from Retreat gets to do this. So, big things can happen to you, too. You could even come from Benoni and get an Oscar."

He urged students to make the most of their learning experiences.

"I was a below-average student. But I had left-wing liberal lecturers and I always pulled the race card about things happening on the Cape Flats – You can't use that excuse anymore. We're all the same now.

"I learnt a lot at UCT, about people. Many of my Cape Flats friends came to UCT and their accents changed – Remember your roots and remember what these gents have to say (the SRC president and the VC, who spoke after Lottering). It will make a lot more sense to you one day."